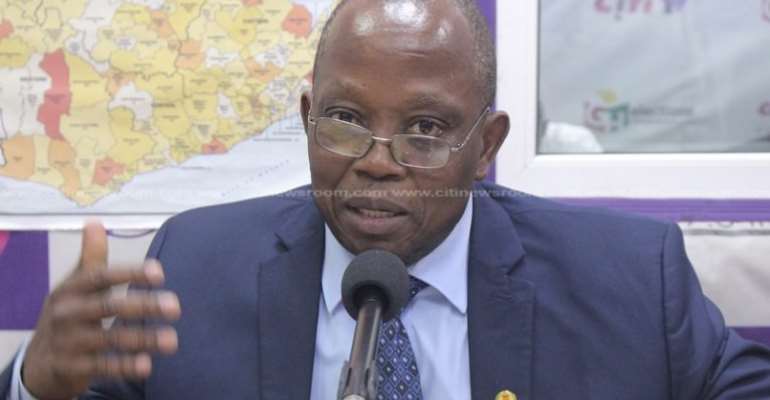 The Auditor-General, Daniel Yaw Domelevo has sued the Economic and Organised Crime Office (EOCO) at an Accra High Court with the hope of stopping the latter from investigating his outfit and the Audit Service.

According to Demelevo, EOCO does not have the power to investigate corruption-related activities in relation to procurement processes.

EOCO earlier in November 2019 invited the Auditor-General and some officials of the Audit Service for questioning following allegations of corruption in the purchase of some vehicles for the Service in 2018.

There are allegations that the Service breached procurement rules while purchasing the said vehicles.

But Domelevo believes that his outfit did no wrong. He also insists that EOCO has no mandate to investigate his outfit with regards to corruption-related procurement breaches.

The Auditor-General in his writ, sighted by citinewsroom.com said: “I have been advised by my lawyers and verily believe same to be true that [the] Respondent [EOCO] has no statutory mandate to investigate the Service and myself either jointly or individually for any offences relating to breaches of the procurement laws of the Republic of Ghana” because such matters fall squarely “within the statutory province of the Office of the Special Prosecutor.”

Domelevo in his writ also insisted that “EOCO is clearly acting with impunity and without regard for due process and the rule of law and above all my constitutional right to administrative justice.”

He insisted that if EOCO is allowed to continue its purported investigations, it will amount to allowing its “ultra vires acts to go unchecked for which I shall continue to suffer irretrievable hardship, damage and harm as Respondent will disrupt my constitutionally and statutorily mandated duty to the Republic.”

“…It is just convenient for the court to intervene to restrain EOCO from continuing with its illegal and unlawful investigations and arrests of officers of the Audit Service pending the determination of the present suit as the balance of convenience is in Applicant’s favour.”

Domelevo in his writ further said he sued the Crime Office because “EOCO is hell-burnt on carrying on its purported investigations and has no plans to stop unless this honourable court intervenes.”

He is thus seeking an “order of interlocutory injunction restraining EOCO by itself, its servants, agents and all such persons however called, from undertaking or continuing to undertake any investigation of the Audit Service and Applicant for alleged breaches of the Public Procurement Act, 2003 (Act 663).”

Domelevo also prayed the court to grant him “An order of interlocutory injunction restraining EOCO, its officers, agents and all such persons however called from purporting to and/or exercising any power(s) of arrest against myself and/or any official of the Audit Service in connection with EOCO’s investigations of the Service for alleged breaches under the Public Procurement Act, 2003 (Act 663).”

Background
EOCO began investigating the Audit Service following a petition it received from a political pressure group Alliance For Accountable Governance on allegations of procurement breaches.

In a letter written to the investigative body by the Auditor General, Mr. Yaw Domelevo indicated that EOCO has  no legal mandate to probe him but EOCO insisted that it has the power to investigate the matter.

It also explained that its investigation is not targeted at ousting the Auditor-General from office. Gov't has no agenda against Auditor General

Government earlier debunked assertions that it has orchestrated an agenda to remove the Auditor General, Daniel Domelevo from office describing such allegations are mere speculations without merit.

Deputy Information Minister, Pius Enam Hadzide dared the public to provide any evidence of witch-hunting by the government against the Auditor General.

“With all the due respect, it is a scandalous suggestion. In worst term, it is a silly suggestion. We cannot encourage this reckless commentary on an otherwise serious suggestion. If there is any evidence, action or inaction that somebody wants to point to even suggest that, somebody's work is even undermined -that can be put forward rather than just making an unsubstantiated, blanket and fundamental statement that there may be an agenda to remove somebody. These are serious matters and I can assure that the government has no agenda. We have no interest at all.”