SC to decide on '04 elections in May 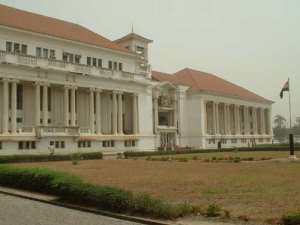 The Supreme Court has fixed May 10, 2006 to give its judgement on a case in which the Electoral Commission (EC) had requested the Court to interpret a Constitutional provision in the 1992 Constitution regarding the duties of the commission in gazetting election results in the country.

Arguing its case on Tuesday, before the court presided over by Justice William Attugugba, counsel for EC, Mr. Osei Aduama, said the provision is a matter of interpretation by the court and that the Supreme Court should make its pronouncements as to what is required of the EC.

However, counsel for the respondent, Mr. Tony Lithur, whose argument led to an intensive intuition and tutorials as to the duties of the EC, in relation to the constitutional interpretations, bowed out Article 45 of the constitution and argued that there was no interpretation to be given by the court since the provision as requested by the EC was clear and unambiguous.

The EC was taken to court by three National Democratic Congress (NDC) activists, challenging the way and manner the 2004 General Elections Presidential results were gazetted, prompting the EC to file an application at the Supreme Court for interpretation.

The EC filed a motion seeking the postponement of proceedings at the FTC to enable the Supreme Court to interpret the constitutional provision on the way and manner the EC should gazette General Elections in the country, but this was refused by the trial High court.

The Court on February 14, this year had ruled that it would deal with the case on its own merit before transferring any issue that required interpretation to the Supreme Court.

Mr. Rojo Mettle Nunoo, together with Clend Sowu and Kofi Portuphy, all NDC activists, are seeking an order of the court, restraining the EC and its agents from destroying the said documents and materials, pending the final determination of the suit.

It was the case of Plaintiffs that at the time the Chairman of the EC declared the incumbent President winner of the Presidential polls, it did not base its declaration on the total results from 230 constituencies of the country, as only those from 225 constituencies were used.

Additionally, plaintiffs claim that the defendant on the following day, held a press conference and basing it declarations on total results from 227 out of the 230 constituencies, declared the incumbent president winner of the polls.

Plaintiffs contended that the results at the time should have been declared as provisional, until all results from the 230 constituencies are collated.

“Up to date of instituting the present suit, the defendant has not declared the full and complete results of the Presidential Elections of December 7, 2004.”

Plaintiffs argued that the collation and declaration of election results in a transparent manner and in time form an integral part of the constitutional duty of the defendant, mandated under the laws of the country to conduct and supervise all public elections and referenda in Ghana.

According to him, the publication of constituency-to-constituency declaration of results in the gazette in respect of the Presidential Elections, as requested by the Plaintiffs was irrelevant.