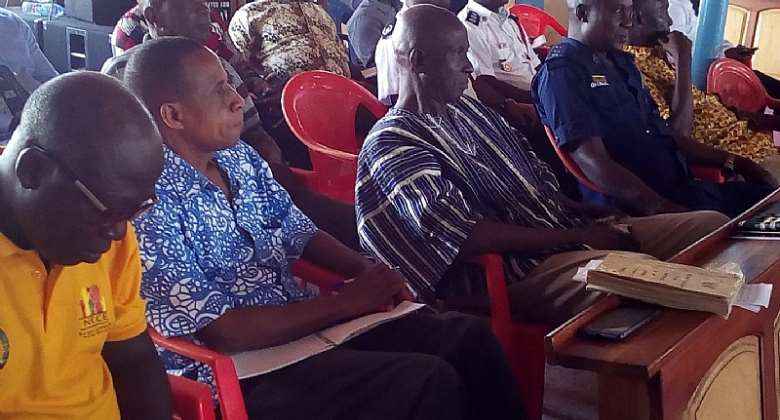 MCE for Berekum East, Mr. Kofi Adjei (in smock) with a cross-section of dignitaries at the Special Town Hall meeting

The Municipal Chief for Berekum East in the Bono region, Mr. Kofi Adjei has made the strongest argument yet to woo voters for a “YES” in the 17th December 2019 referendum to amend Article 55(3) of the 1992 Constitution to ensure political parties participation in Local level elections. Addressing participants at a special town hall meeting drawn from trades Association, students and other interest groups to campaign for a YES vote, the Municipal Chief Executive argued that for Ghanaians to fully reap the fruits of democracy there was the need for political parties to be allowed to sponsor candidates to contest local level elections including the elections of Metropolitan, Municipal and District Chief Executives. This he said could only be achieved if at least 40% of registered voters vote in the referendum with a 75% YES vote. He therefore urged registered voters in the Berekum East Municipality and for that matter Ghanaians to come out in their number on December 17th to vote YES for the amendment of Article 55(3).

He allayed the fears of Ghanaians who think opposition parties Metropolitan, Municipal and District chief executives will sabotage ruling government by citing the examples of Johannesburg and Pretoria all in South Africa whose majors are from opposition party.

On his part, the Berekum East Municipal Director of the National Commission for Civic Education Mr. Abina Sachi Samuel Said various research reports including the one conducted by the NCCE in 2015 and the Ghana Center for Democratic Development(CDD-GHANA) suggest that majority of Ghanaians were in favour of the election of Metropolitan, Municipal and District Chief Executives. He therefore called on Ghanaians to see the opportunity provided through the referendum to exercise their civic rights.

Adding his voice to the call for YES vote, the Municipal Information Officer for Berekum revealed that the government through the Ministry of Local Government and Rural Development has come out with a four point road map to ensure a successful management of the process. These his said included pre-referendum activities, referendum and post referendum as well as change management and capacity building. He added that government has shown commitment for the process by submitting to Parliament for amendment of Article 243(1) which deals with the appointment of Metropolitan, Municipal and District Chief Executive by the President. He concluded that after the amendment of Article 243(1) by Parliament and the amendment of Article 55(3) through referendum, various consequential amendments will be made to ensure smooth running of the Metropolitan, Municipal and District Assemblies.

Concerns and questions by various participants on political parties participation in local level elections ans the election of Metropolitan, Municipal and District chief executives were addressed by both the Berekum Municipal Director of the NCCE and the Information Officer.