Referendum On December 17 Has Nothing To Do With MMDCEs Elections 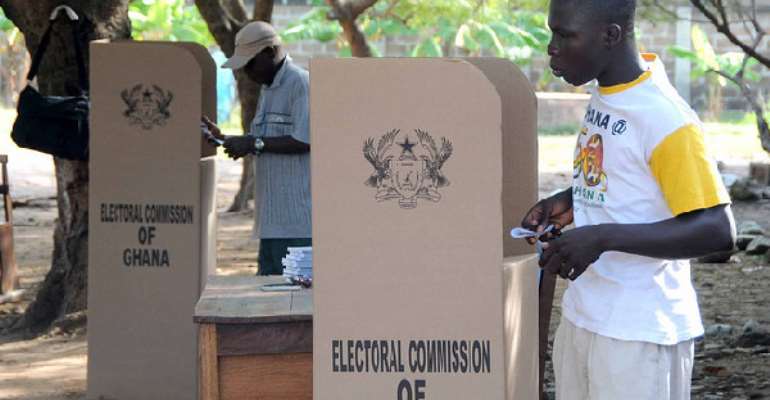 Come December 17th, 2019, a scheduled referendum by the Electoral Commission would take place across designated centers in Ghana. Having observed the debate going on, Ghana`s moving ahead to the democratization of the local government system through the involvement of multi-party involvement in the election of Metropolitan, Municipal and District Chief Executives (MMDCEs) "referred to as DCE in this write-up" and Assembly members, unit committees other local government units.

I am not going to debate on the merit and demerits of partisanship local government elections (Assembly members and unit committee elections and other local government unit elections) and election of MMDCEs (largely known as DCEs) on multi-partisan votes, but just to clear briefly some misinformation thrown out there by high ranking public servant, and some respectable media houses and supposed expert in the field. Some I believe may be the lack of understanding of the two important issues at hand.

Before then, it calls for drum home that the referendum on December 17, 2019, has nothing to do with the election of DCEs (whether partisan or not): Rather it's about processes of electing Assembly members, unit committees, and other local government units only.

WHAT IS THE DEC, 17 REFERENDUM ABOUT? The referendum is about the modus of the election of Assembly members, unit committees and other lower local government units). The referendum is to decide collectively whether to maintain the local government election as non-partisan (That's maintaining the status quo of Article 55 (3) or not (Making Election of Assembly Members, Unit Committee Members Partisan). This has nothing to do with DCEs appointment or election.

To start with, Article 55 (3) stipulates that "Subject to the provisions of this article, a political party is free to participate in shaping the political will of the people, disseminate information or political ideas, social and economic programmes of a national character and sponsor candidates for elections to any public office other than to district assemblies or other local government units, namely the unit committees". This is an entrenched provision of the constitution.

The referendum, therefore, is about a ``yes or no`` vote to amend Article 55 (3) for the partisanship of local government elections. For the referendum to see the light of day, it must receive approval of (Yes vote) of 75% of at least 40% of eligible voter turnout. If this is achieved, Parliament can finally pass the bill.

SO WHY THE NEED FOR A REFERENDUM? It's because of Article 20(1)(c) which makes article 55 (3) an entrenched position. Hence the need for a referendum should an amendment be proposed.

Article 20(1)(c) of the 1992 Constitution makes Article 55 (3) an entrenched provision and Article 290(2)(4) provides for that processes to amend entrench position. There is, therefore, the need for a referendum to amend this entrenched position per Article 290(2)(4) of the 1992 constitution. If the referendum obtains the needed Yes votes for the successful amendment of Article 55 (3), then Ghana's local government elections would be partisan. Among others, these political parties can consequently sponsor candidates to contest in Local Government elections (Assembly members and unit committees and other lower local government units). Again this has nothing to do with DCEs appointment or election.

WHAT IS THE REFERENDUM NOT ABOUT? The referendum has nothing to do with DCEs appointment or election in any way which unfortunately seems to be what many people regrettably believe. Worst culprits being public servants, media houses and the local government expects unforgivably.

Provisions for DCEs appointment or election are taking care of by Article 243 of the Constitution which stipulates how they are appointed or elected to office. Article 243 (1) specifically states:

“There shall be a District Chief Executive for every district who shall be appointed by the President with the prior approval of not less than two-thirds majority of the Assembly present and voting at the meeting". Because this article is not enshrined, parliament can amend it; hence parliament is the institution vested with the power to amend the way DCEs are brought to office (whether by appointment, nomination, etc.). This article is not entrenched and does not require a referendum of votes by the general populace but parliament to amend.

There are processes started and currently underway to amend Article 243(1) of the Constitution by parliament and not through any referendum. This will require 2/3 majority votes by the parliament for a successful amendment.

Concluding I will retreat again that, there are two issues here with different processes to secure amendments as below.

1. Referendum to amend Article 55 (3) (Assembly Members, Unit Committees elections and other lower local government units) – This has nothing to do with DECs. No matter the outcome of the referendum, thus, a Yes or No vote in the referendum will only produce an outcome to amend article 55 (3) hence holding partisan local government elections or not; However the outcome does not affect parliament`s power to amend Article 243 (1) which is concern about the appointment or elections of DCEs to office. The referendum is by the Electoral Commission and to be passed by parliament if it is successfully approved by 75% of at least 40% of eligible voter turnout.

2. Parliament to Amend Article 243 (1) (DCE nominations /elections) – A successful amendment by parliament will allow for DCEs to be elected by Ghanaians on universal adult suffrage on a political partisan basis. This can be done by parliament only because Article 243 (1) is not an entrenched provision in the constitution. Again this has nothing to do with the referendum. The outcome of the process to amend this Article by parliament has no direct implication on the outcome of the referendum on December 17th, 2019 and vice versa.

[email protected] The writer, a Chartered Management Consultant, and a Ph.D. Researcher in Management Science & Engineering at Jiangsu University, China is a research fun of issues of Digital Inclusive Finance, Public Policy & Local Governance, ICT & Digital Economy. Tampuri has years of practical experience as staff within the development institution of governance and has vast knowledge in Management.