Canadians Kidnapper Cries For His Money 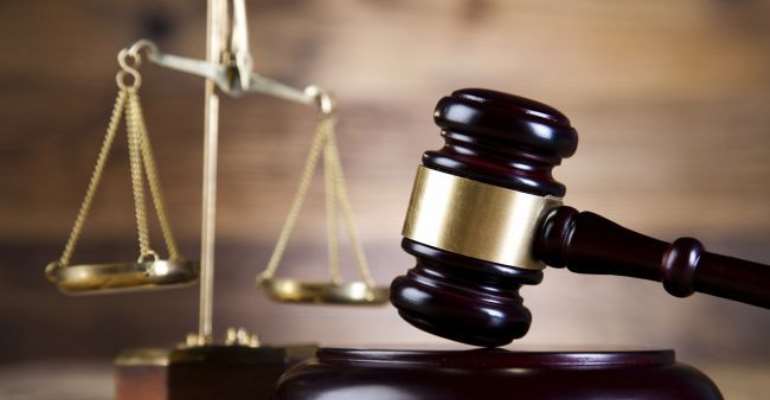 One of the accused persons alleged to be involved in the kidnapping of two Canadians in Kumasi is begging to have access to his money that was seized during his arrest.

Samson Aghalor, aka Romeo, wanted the Accra High Court to direct the police to give him around GH¢890 which was found on him during his arrest.

His counsel, Mr Yaw Danquah, told the Accra High Court yesterday that GH¢250 of the amount had been released to his client, but it was necessary for his client to access all the money.

“My client’s survival as to how to feed himself depends the money,” he said.

At that point, the presiding judge, Justice George Buadi, asked if the money was not part of the exhibits to be used as evidence by the prosecution for the trial.

Unfortunately, the investigator handling the case was not present in the courtroom to assist the court with that kind of information.

Prison feeds them
In her response, the prosecutor, Ms Winifred Sarpong, a Senior State Attorney, argued that apart from the investigator not being there to verify whether or not the money was an exhibit, the accused persons were also fed in prison.

It was, therefore, her submission that the argument by counsel that the accused needed the money for feeding had no basis, since they were already on remand in prison and were being fed by the state.

Mr Danquah replied that even in prison, inmates were encouraged to support themselves.

Disclosures
In a related development, the court directed the prosecution to serve accused persons with all the evidence it would rely on for the trial.

The direction was in line with a Supreme Court’s decision and a recent practice direction by the Chief Justice which made disclosures in criminal trials, a must.

The prosecution must make the disclosures on or before November 14, this year.

Hearing continues on November 21, 2019.
Not guilty
Four people, made up of three Nigerians and a Ghanaian, are on trial for allegedly kidnapping Ms Lauren Tilley and Ms Bailey Chitty, the two Canadians.

The Nigerians are Aghalor, aka Romeo, 27, a computer engineer; Elvis Ojiworye, 27, a businessman, and Jeff Omarsa, a tiler, while the Ghanaian is Yusif Yakubu.

They have pleaded not guilty to two counts of conspiracy to commit kidnapping and kidnapping.

Plot
The prosecution’s facts as presented were that Aghalor, who had been in Ghana for some time, became a friend to Yakubu in March 2019.

In the course of their friendship, Aghalor brought up the idea of kidnapping as a lucrative venture which was accepted by Yakubu.

Yakubu agreed to assist Aghalor in the kidnapping activity and even purchased a pistol at GH¢3,700 for Aghalor.

To bring their idea to fruition, the prosecutor said, Aghalor went to Nigeria in May 2019 and recruited Ojiyorwe and Omarsar to be part of the gang.

According to the prosecution, the three Nigerians, upon their arrival in Ghana, resided at Ashaiman for some time before they went to Kumasi to meet with Yakubu.

“In Kumasi, the four persons discussed the agenda of kidnapping white people (expatriates) and getting good money from them. Yakubu was tasked by Aghalor to arrange the necessary things needed for the kidnapping operation,” it said.

It said Yakubu bought the items needed for the kidnapping, including pistols and also rented a car.

The prosecution added that on June 4, 2019, the group tested the pistols and afterwards set off to town in search of prospective victims.

Kidnapping
The two Canadians were in Kumasi for voluntary work.

According to the prosecutor, on that fateful day that the gang set out to kidnap people, Ms Tilley and Ms Chitty, in the company of other colleagues, left a restaurant for their apartment at Nhyiaeso, a suburb of Kumasi, in an Uber taxi.

“Just when they alighted from the taxi, the gang drove their vehicle close to them and grabbed them amid shootings,” the prosecution said.

The gang kidnapped the two ladies and hid them in an uncompleted building at Amoam Achiase in the Kwabre District in the Ashanti Region, the prosecution explained.

During their captivity, Aghalor contacted the parents of the two women and demanded a ransom of $800,000.

“To frighten the parents to send the money, the gang smeared the bodies of the victims with the blood of a fowl, took pictures and forwarded same to their parents,” the prosecution added.

Rescue
The prosecution told the court that on June 11, 2019, security operatives, acting on intelligence, arrested Yakubu.

Afterwards, the team proceeded to arrest Aghalor, Ojiyorwe and Omarsar at their hideout at Kenyasi Krobo and rescued the two women.