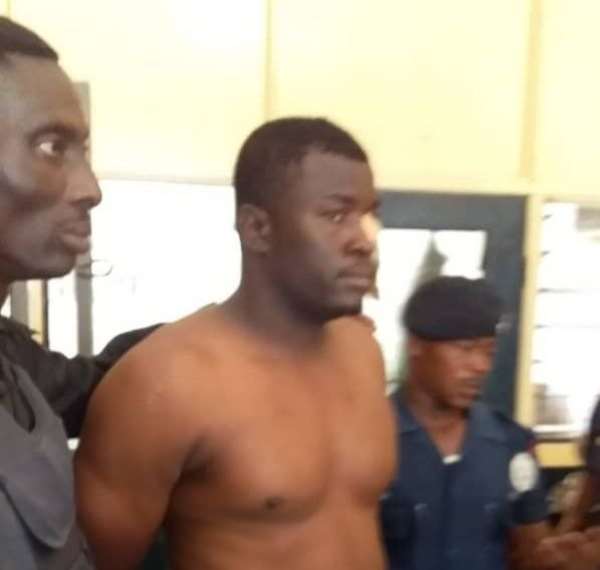 Lawyer for Eric Kojo Duah, the man accused of murdering two policemen, has pleaded with the court to order a psychiatric evaluation of his client.

George Eshun told the Kaneshie District Court that it was unusual for a sane person to brandish a gun and use it in such a manner his client is alleged to have done.

Mr. Eshun said he has known the accused person since he was a child and was always humble.

According to the defence lawyer, the death of Eric’s mother a while back may have had a negative effect on his mind, hence the need for the psychiatric evaluation.

Eric Duah is alleged to have shot and killed two policemen– Mohammed Awal and Michael Dzamesi – when they accosted them for refusing to heed to a signal to stop.

State Prosecutors handling the case dropped charges against a suspect charged over the same crime.

The new charge sheet filed however does not include Theophilus Acheampong, leaving the court to free him.

A similar move by state prosecutors led to the release of six suspected persons.

George Eshun said in court Monday that the facts of the case read by prosecution only mentions that the second accused person (Theophilus Acheamong) was only in the car with Eric Duah and drove the car away at a point.

He insisted he is not clear in his mind how that amounted to any crime for which reason he should be charged.

ASP Asare responded that the court at this stage was not taking evidence and can therefore not be invited to assess the case based on the facts.

He rebutted that investigations is a process and was still ongoing.

He assured the court that committal proceedings will start shortly.

On the request for psychiatric examination, ASP Asare described the request as “surprising”.

He said the accused person had appeared before the court many times and that this was the first time his lawyer, Mr Eshun, was appearing as his lawyer.

He therefore wondered the basis for his suspicion that Kojo Duah may not be sane. He said the fact that someone is charged with murder cannot be a reason for such a request.

He said the state is opposed to the application and urged the defence lawyers to confer with his client and avoid wasting the court’s time.

The Kaneshie District court turned down the request for evaluation.

The court in its ruling indicated that the accused person has so far not shown any sign of insanity. The magistrate also pointed out that Mr Eshun has informed the court that he was yet to have conference with his client since taking over the case.

The magistrate therefore wondered why such an application will be made.

On whether the facts of the case supports a charge against Theophilus Acheampong, the court pointed out that the application is premature as their pleas have not even been taken.