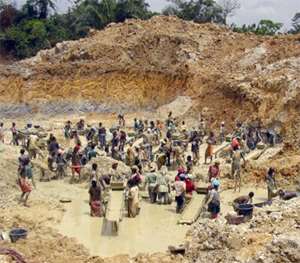 K2 -- You're no doubt talking about the PBS nonsense?

-- Koo, it isn't "nonsense"! It was a typical 'free market' scam that inevitably got unravelled....

-- Who constituted PBS? Had you ever heard of any industrialist/trader/entrepreneur/body corporate mentioned in connection with the PBS consortium, before?

And yet, one day, our compatriots handed this mysterious "consortium" a contract to take over the [POTENTIALLY] MOST PROFITABLE company you could ever hope to operate in Ghana!

Yes! Electricity supply is a blinking MONOPOLY, isn't it? And MONOPOLY means what, I ask you? Nothing but uncountable money! I ask you again: Wast it PBS that built the Akosombo Dam -- the source of almost all the electricity generated in Ghana?

Was it PBS that built the Bui Dam to supplement the power generated by the Akosombo Dam?

Yet, a great part of the INCOME from both dams was to be handed to PBS? Isn't that what is called reaping what you have not sown? Worse, if by any chance, the operators of PBS, were to be crooks, and they went to the Public Utilities regulator and sweet-talked it thus: "We have spent x amount on y and z operations, and therefore we need a price increase of q quantity, to be able to stay afloat, and if by any chance, some members of the regulator's board -- or their friends -- happened to own shares in PBS, or at any rate, were somehow not inclined to be too "tough" on PBS, wouldn't PBS hold the nation's electricity consumers to ransom?

Koo, you're hurting me badly. Even as you speak, I have just been obliged to spend no less than 300 cedis in just one week, repeat just one week ( ! ) on purchasing diesel for my home generator. What happened? They cut off the mains supply. At the weekend, as usual. When it came back on, my house alone couldn't be reconnected. We investigated and were told that there are problems with two out of the three "phases" that connect me to the mains! How did that happen? Ask me! Anyway, it was to the generator I had to turn. Buy diesel; add taxi fares to and from the petrol station. Add unofficial fees paid to those who came to look at my connection and detected the fault!

Koo, you paid without complaining?

Complain to whom? The management of my estate says it was the ECG that connected me wrongly. In any case, with my food rotting in the fridge, wouldn't I pay ANYTHING I was asked to pay? That's the implication of the PBS nonsense. There's just no room for the consumer to do anything.

Koo, you have suffered!

And please remember I am just a home consumer of electricity. Suppose I were an industrialist with contracts to fulfill; products to manufacture and deliver; workers to say; bank interest to defray! Do you now see how anyone who controls the supply of electricity to us holds the whole nation to ransom?

Yes. Shiee -- it is frightening!

And you hand this power to a consortium whose previous performance -- or non-performance -- is unknown to anyone in the country! And they repay your trust by using an insurance certificate as a guarantee for payments! Then theyu try to use payments they have collected from consumers as payment for the shares handed to them? Koo, if you allow this to happen and then come to your senses and decide that the irregularities are too glaring for others not to notice, do you expect your fellow countrymen to regard the whole thing as an accident? Oh, why should an accident land someone such a ripe plum of an income earner?

Yes. And apparently, the US Governmernt wants to punish Ghana for having detected this sordid mess and trying to rectify it?

Koo, do you know something? A nation's economy is too precious to be encased in an ideological paper wrap called privatization!!

Koo, the funny thing is that it is the same American Government that gave the Kwame Nkrumah Government the money for the Volta River Project! It didn't tie his hands in any way -- well, apart from the VALCO power rate stipulation! But erven that was a Kaiser thing more than a US Government thing.

The irony is that our Financer Minister would if he cared to read about his own father's role in the economic history of Ghana, find out something interesting about precisely this PBS sort of caper! Dr Jones Ofori Atta gained fame by attacking the "Abbott Agreement" [between Abbott Laboratories of the USA and the Ghana Government]. It was Jones who demolished the bogus arguments put forward by a guy called Sylvan Amegashie, who wanted Abbott, a private company, to earn profits out of an enterprise conceived of and financed by the state of Ghana! Just like the ECG!

It may be history but do we know what will replace it? I am sure there are candidates lining up with their beaks widely open!

You mean to suck new wine from old bottles?

An ideological metaphor at that, not a Biblical one!

Koo, you are bad paa. You've made me forget that I was going to talk about the 50,000 Chinese that, according to a very recent report, have been discovered operating galamsey mining in Ghana.

50,000? But that's unbelievable, Koo! I mean, if you lined them up behind each other, one foot apart, they would stretch to 85 miles! I repeat -- 85 miles! And that's according to a computer calculation, I must make clear!

Koo, my head is aching. Do members of our Government realise that because of their educational qualifications, our people expect them to carry out policies that make sense to all and sundry? I mean the point of a good education is that it makes you ask questions. You ask above all, how will the rest of the society see this? How can an articulate Opposition that's well versed in propaganda, make use of this to discredit my Government and my President?

Koo. you mean, the Minister in charge of immigration hasn't bothered to ask questions about the Chinese presence, or if he has, he hasn't seen anything odd about it?

Or, as the Gas would put it: "Anokwale Mpo!" (So annoyingly obvious I don't know what to say