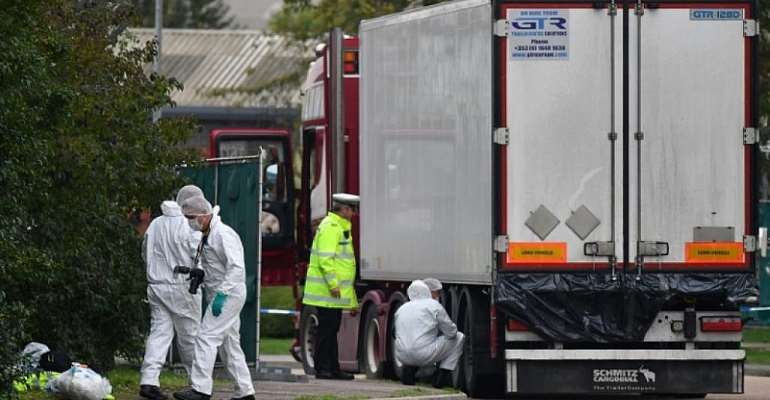 The 25-year-old driver of the lorry which hauled a refrigerated container where 39 illegal immigrants died this week has been charged and is due to appear in court on Monday in Essex.

British police investigating the deaths of 39 people charged the driver on Saturday with manslaughter and people trafficking.

Maurice Robinson was arrested shortly after the bodies of eight women and 31 men were discovered in the truck in an industrial zone in Grays in Essex, south-east England.

Three more people are in custody in Britain over the investigation. A Northern Irish man, wanted in connection with the inquiry, was also arrested in Dublin, the Irish capital, on Saturday.

The 38-year-old man and woman arrested this week in Warrington in England, are still in custody but, according to some meida reports have denied any involvement.

Brexit and people-smugglers
The European Migrant Smuggling Centre at the centre of this international inquiry, is part of the European Union's law enforcement agency, Europol.

The Hague-based unit is seen as exceptional in tracking cross-border crime and it possesses a vast database on smuggling networks.

Borders are again rising to the fore of Brexit related issues, and could factor in to campaigns if, as looks  probable, an early election is called.

British MPs, and not only opposition members, as well as anti-trafficking experts are concerned that the UK would be excluded in the event of a no-deal Brexit, and would at best have downgraded access even if a Brexit deal were done.

Cited in the British mainstream press, the Tory chair of the Commons Intelligence and Security Committee, Dominic Grieve has remarked on how this week's people-smuggling tragedy has highlighted the need for international cooperation on people trafficking.

A Home Office spokesperson said intensive work is ongoing to ensure the UK's continued involvement in Europol and its agencies after the end of the transition period in 2020.

Vietnamese hope for better life
The victims were originally believed to have been Chinese, but police retracted and believe they are Vietnamese. One of the human-traffickers' known routes is via China.

Vietnam's ambassador, Tran Ngoc An to the UK, met police investigating the case on Saturday and has spoken on the phone to British interior minister Priti Patel

Migrants sometimes pay smugglers tens of thousands of dollars to make the dangerous journey hoping to live better and help their families back home. The annual per capital income is about 2,100 euros according to the World Bank.

British police Detective Chief Inspector Martin Pasmore has appealed to the Vietnamese community in Britain for information to help the inquiry. Identification, he said, would take quite some time.

He says no action will be taken against anyone who is in the UK illegally who  comes forward to claim a friend or relative.