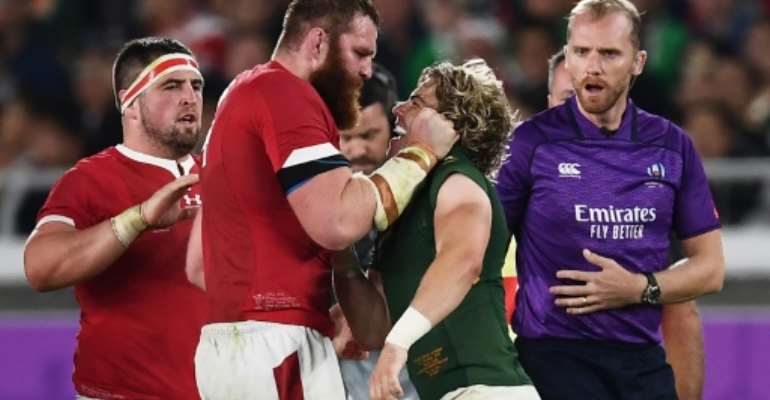 South Africa's Faf de Klerk may have been the smallest man on the pitch but that did not stop the scrum-half making his presence felt as the Springboks edged out Wales 19-16 in Yokohama on Sunday to secure a place in next week's World Cup final against England.

Before kick-off, much had been made of the sheer physical threat posed by South Africa's forwards but de Klerk, not for the first time this tournament, demonstrated that even modern rugby union can still be a game for all shapes and sizes.

Amid a dire first half that ended with the Springboks 9-6 ahead after Handre Pollard kicked three penalties to two from Dan Biggar, de Klerk provided a few moments of wit and invention.

The 28-year-old, who credits his time with English Premiership side Sale for sharpening his game, was a buzzing figure in both attack and defence.

He caught Wales napping with a blindside break off a scrum before kicking into open space and then chasing up his own punt ahead, and then made light of a considerable size difference to tap-tackle George North as the powerhouse Wales wing looked to counter-attack.

One of de Klerk's better box kicks was then just inches away from being regathered by wing Makazole Mapimpi.

De Klerk proved his defensive worth again with another fine tap-tackle on North that snuffed out the threat of a rare Welsh visit to the Springboks' 22.

He did, however, make a rare error early in the second half when, under no pressure, he dropped a high Wales kick and knocked the ball into touch to concede a line-out.

De Klerk then also found himself involved in a confrontation with towering Wales lock Jake Ball, the Springbok number nine grinning broadly as they grabbed each other's shirts despite the huge physical disparity between the pair.

He also marshalled the backline, linking well with fly-half Pollard, in the build-up to centre Damian de Allende's converted try that saw the Springboks into a 16-9 lead in the 57th minute.

At the other end of the pitch, de Klerk was on hand to cover a Rhys Patchell kick into the in-goal area as Wales pressed for a try.

And with just a couple of minutes left to play, de Klerk kept his composure superbly to produce a chip behind the defence that bounced into touch to set up a line-out deep into Wales' 22 that helped the Springboks close out the game.