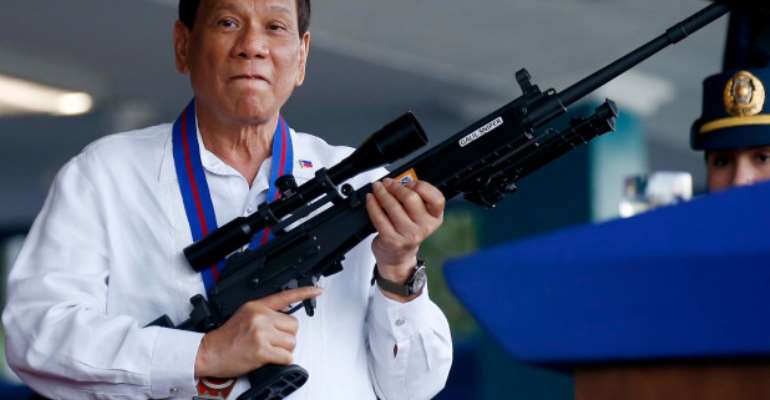 The Philippine leader wants to give the public 42,000 free guns, photo credit: AP

Corruption is an abuse of official position, by giving and receiving a bribe, also the abuse of authority or other illegal use of position of an individual contrary to the legitimate interests of society and the state in order to obtain benefits in the form of money, valuables, and property.

Considering the impact of corruption on the state of the economy, worldwide, many leaders have tried to fight this disease but none has been successful to reduce the level of corruption, let alone eradicate it.

Among world leaders who have inclined on ruthless methods to solve corruption problems, is the Philippine President, Rodrigo Duterte. The Philippine leader has allowed citizens to shoot officials demanding a bribe, but not to kill them.

Duterte suggested that in the event that officials demand a bribe from a person who pays taxes, fees, customs duties, and so on, the victims have the right to shoot those fools.

“If you have weapons, you can shoot them, but don’t kill them, because otherwise, you may not receive a pardon as a result of the court proceedings,” Duterte said.

According to the president, the only measure against anyone who shoots an official violating the law will be only serious corporal punishment, but not imprisonment. In order not to go to jail, the head of state offers to shoot in the legs.

He also said that corruption has become a widespread problem in the country. “This is a worm sitting inside almost everyone in the government,” he emphasized.

Duterte also called on citizens to report each case of an offense or corruption involving officials. He said that if the incident comes to his attention, it will be official and allow the appealing citizen to hit the offender in the face, the Federal News Agency said.

Duterte, who was elected President of the Philippines in May 2016, advocates tough measures to combat offenders. Known for his cruel treatment to drug dealers, Duterte announced that he intends to execute the heads of large cartels involved in the sale of illicit substances.

Still, on cruel measures to fight corruption in his country, the Philippine President, promised to drop corrupt officials from helicopters. He emphasized that he was ready to do this as he did in the past.

“If you are corrupt, I will take you by helicopter to Manila and drop you down. I’ve done this before, why not do it again? ”He said.

According to Duterte, he once threw out a Chinese citizen suspected of rape and murder from a helicopter.

The President of the Philippines called Obama a “son of a bitch” and promised to curse him.

Then Duterte threatened that he would break the agreement with the United States on cooperation in the defense sphere.

Rodrigo Duterte also responded to criticism from the United States on a massive anti-drug campaign and stated that US President Barack Obama could "go to hell."

According to Duterte, he and Trump have one thing in common, since both like to swear. “In this we are alike.” He said.

He was one of the world leaders who said he enlisted the support of the newly elected US President Donald Trump.

Rodrigo Duterte said that he personally killed during the fight against drug dealers when he was the mayor of Davao.

Then threatened to burn the UN out of allegations of reprisals against drug suspects.

You may call this man, a crazy person but he doesn’t care. When persuasion fails force is applied, therefore, if people can’t get over corruption, this is how he is going to deal with them.

Ghana is a filthy corruptible country without a limit and nothing can stop corruption since most of the leaders are deeply corrupt.

If Duterte should be the president of Ghana for only three months, believe me, the level of corruption in that country will fall drastically like his Philippine. Ghana indeed stinks of corruption no powerful perfume can eradicate.