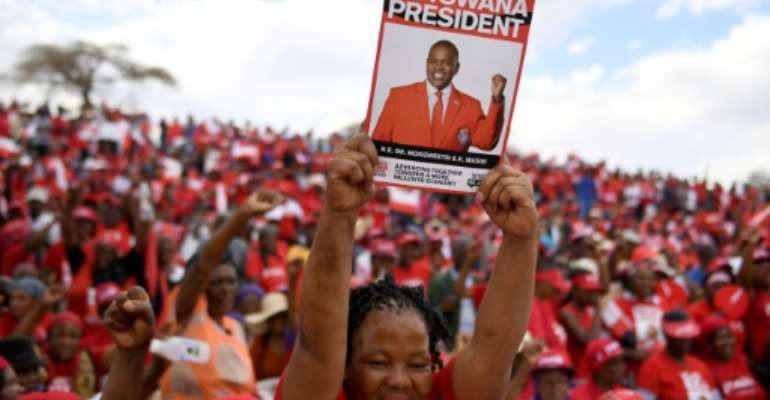 Botswana goes to the polls on Wednesday in a hotly contested general election that could test the country's traditionally stable politics, as the ruling party faces its toughest challenge yet.

The historic Botswana Democratic Party (BDP) -- whose rule has been unfettered since independence from Britain in 1966 -- was shaken up earlier this year after former president Ian Khama dramatically renounced his hand-picked successor Mokgweetsi Masisi.

Khama stormed out of the BDP in May after accusing President Masisi -- his deputy until last year -- of autocracy.

The dispute could fracture the BDP and offset Botswana's reputation as a beacon of democracy and stability in Africa.

It also strikes another blow to Botswana's founding party, which saw its share of the vote dip below 50 percent for the first time at the last election in 2014.

Adding insult to injury, Khama has thrown his weight behind the BDP's strongest rival -- a coalition of opposition parties called the Umbrella for Democratic Change (UDC).

While the opposition group was once Khama's fiercest critic, he has urged voters to back the UDC in a bid to unseat the "dead" BDP.

Should Khama fulfil his goal, it would be the first time diamond-rich Botswana sees a change of government in 53 years.

Around 931,000 of the country's 2.2 million people are expected to cast their ballots in the parliamentary and local elections.

The BDP, UDC and two smaller parties will vie for 57 seats in parliament. The party with the most seats chooses the president.

During an interview with AFP in the town of Mahalapye, 200 kilometres (124 miles) northwest of the capital Gaborone, Khama said the "arrogant" Masisi administration posed a "genuine threat" to "our general democracy, our peace and stability".

"I have not packed any books in my office, I'm not about to leave the house I'm living in," Masisi told reporters after a final speech before voting day.

"But if the unexpected should happen and we do not succeed, I will pack all my belongings peacefully and come home," he added.

"The rule of law remains supreme in Botswana," said Masisi. "And I'm addicted to it."

After the rally, supporter Boitumelo Dintwe told AFP she was confident Masisi would win.

"Masisi is intelligent, he is a real leader with a vision," said Dintwe, 39, who sells perfume.

"That one doesn't think," she added, referring to Khama.

The BDP is expected to gather around 44 percent of the vote, according to a pre-poll survey carried out by Afrobarometer.

UDC leader Boko Duma greets supporters at a rally in the capital Gaborone as it seeks to unseat the historic ruling BDP party. By Monirul Bhuiyan (AFP)

"These elections are actually a test to how stable the country is," said Gladys Mokhahwa, a politics lecturer at the University of Botswana.

"A test of... how entrenched democratic principles and mythos are in this country," she told AFP.