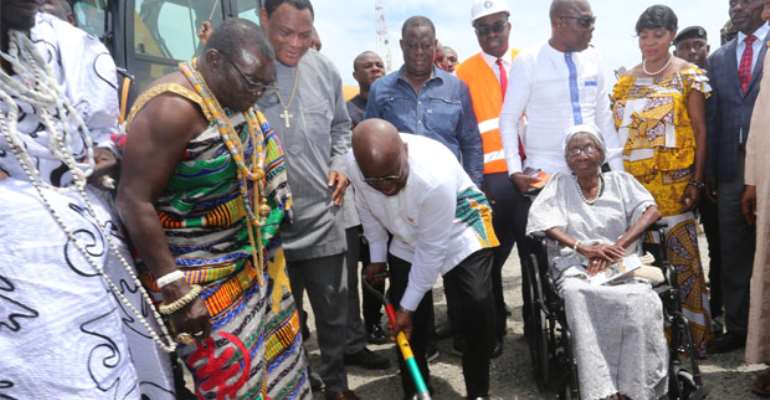 President Akufo-Addo cutting the sod for the construction of the Obetsebi Interchange. With him are Nii Ayikai III (2nd left), Akamaijen Mantse and Augustina Obetsebi. Picture by Gifty Ama Lawson.

The cost for the construction of flyovers or interchanges in the Accra Metropolis has sparked heated debate over which administration ensures value-for-money for projects.

The ruling New Patriotic Party (NPP) is insisting that it has been able to cut the cost that will be involved in the construction of the Obetsebi Lamptey Interchange, unlike the then Mahama-led National Democratic Congress (NDC) administration, which built the Kwame Nkrumah Circle Interchange, popularly called Dubai, in Accra, at an exorbitant cost.

Available records show that phase one of the Nkrumah Circle Interchange — which involved two bridges on the second tier of length 170 metres and a total width of 17 metres as well as a total ramp length of 240 metres — was done at the cost of €74 million.

In the same phase one, the NPP government, led by President Akufo-Addo, is constructing a total flyover length (bridge and ramps) of 340 metres with a width of 18.5 metres at the cost of US$35 million at Obetsebi Lamptey at Kaneshie, Accra.

In the Nkrumah Circle second phase project, the Mahama administration used a whopping US$170 million to build the Ring Road flyover with a total bridge and ramp length of 1.2km and a width of 24 metres, with three bridges over the Odaw River, two terminals, a water park and road works.

For the Obetsebi Lamptey second phase, the Akufo-Addo government is using €87 million to construct a total bridge and a ramp length of about 700 metres with a width of 18.5 metres as well as about a kilometre of storm drainage expansion works and road works on the ground level.

The total cost for the Nkrumah Circle projects under the NDC was US$270 million while under President Akufo-Addo, it will cost $135 million.

“The ground level will have a re-modeled roundabout, whilst the second tier will be an East to West flyover linking the Graphic Road to the Kaneshie-Mallam road. The third tier will be a North-South flyover on the Ring Road from the Royalhouse Chapel International to the Central Mosque at Abossey Okai,” he added.

The President said the construction of the interchange would help address the congestion being faced by commuters at the roundabout and would also help improve mobility on the Ring Road corridor.

“Critical drainage structures that go through the roundabout will be upgraded under this project. This is necessary to reduce the incidence of flooding at the roundabout.

“The interchange will improve mobility on the western parts of the Ring Road. It will help improve travel times to the Korle Bu Teaching Hospital and improve access to Abossey Okai spare parts area and to businesses along the Graphic Road and the Kaneshie-Mallam highway,” the President pointed out.

“It is estimated that Obetsebi Lamptey Circle records a peak hour traffic volume of approximately 8000 vehicles per hour with a Level of Service (LOS) of F at peak periods. This LOS which is the worst rating is unacceptable.”

He mentioned that the project would be undertaken by M/S Qnueiroz Galvao-UK International as a design and building contractor, and the works would be managed by the Minister of Roads and Highways through the department of Urban Roads.