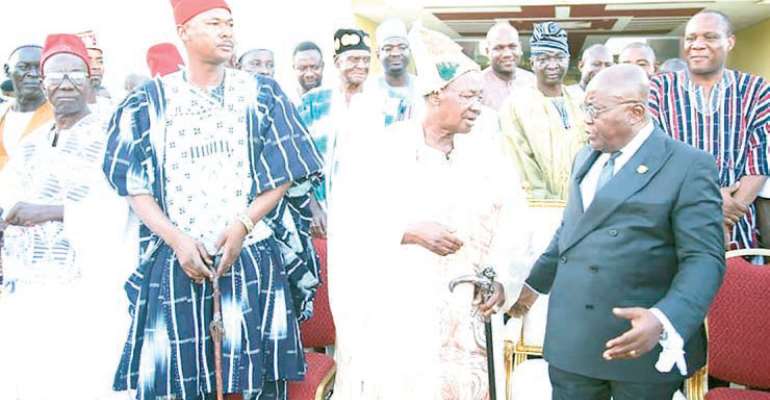 President Akufo-Addo interacting with the leader of the Paga delegation

The chiefs of the Paga Traditional Area in the Upper East Region have expressed profound gratitude to President Akufo-Addo for the befitting burial he gave their late kinsman, Clement Kubindiwo (C. K.) Tedam.

Until his death on April 26 this year, C. K. Tedam was Chairman of the Council of Elders of the ruling New Patriotic Party (NPP).

He was not only held in high esteem in the party but was also considered an icon of the Busia, Dombo, Danquah political tradition and a founding member of what later metamorphosed into the NPP.

He first won election to Parliament as an independent candidate in 1954 and won another in 1956 on the ticket of the Northern People's Party (NPP).

But the funeral and state burial given their late kinsman is what has caught the hearts and minds of his people to thank the President and the government and people of Ghana for the honour done them.

“We thank you very much for the opportunity, and we are sincerely grateful to Your Excellency for the honour done Hon. C. K. Tedam and us in every step before and during his funeral,” the Spokesman for the chiefs and people of Paga, Professor Albert Luguterah, said when they called on President Akufo-Addo at the Presidency on Tuesday.

Like the fictional Oliver Twist, they demanded more developmental projects in Paga which is in the Kassena Nankana West District, especially the projects that were being pursued by the late C. K. Tedam before his death.

On his part, President Akufo-Addo eulogized the late C. K. Tedam as true son of the Upper East Region, who had the development of the region at heart.

He, therefore, assured the Chief of Paga, Pe Charles Awampaga, and his people that all the projects and concerns they had presented to him would receive his urgent consideration and attention.

He was equally elated about the fact that Parliament had passed the Act for the naming of the Navrongo campus of the University of Development Studies (UDS) after C. K. Tedam.

Meanwhile, the Paga Traditional Council has allocated 200 acres of land for building some of the new faculties of the university, with an assurance to release more lands when the need arises.