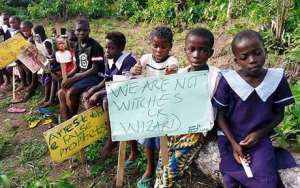 Africa is one of the poorest continents on earth according to the standard of living of its inhabitants, especially the majority of its indigenous populace and yet it is endowed with massive economically empowering natural resources for mining as well as arable lands and good weather conditions for agriculture and tourism.

A number of factors have been blamed for this despicable economic reality of Africa, including corruption and poor governance which all negatively affect the distribution of resources and wealth, as well as investment and morality at the expense of the sustainable existence of a continent referred to as the cradle of humankind.

Even though the contribution of corruption and poor governance in dropping Africa to the bottom of the log on the continental economic league cannot be refuted, it is also important to understand that there is a spiritual pandemic called witchcraft which has perennially wreaked Africa for centuries.

According to Encyclopaedia Britannica, Home and Student Edition 2009, Witchcraft is the exercise or invocation of alleged supernatural powers to control people or events, practices typically involving sorcery or magic .

The Merriam-Webster Dictionary describes sorcery as the use of power gained from the assistance or control of evil spirits especially for divining: necromancy , and it describes magic as the use of means (as charms or spells) believed to have supernatural power over natural forces.

In the modern technological sense (telecommunication and networking), witchcraft can be equated to unethical spiritual hacking since it enables someone to have malicious secret remote control over the being of another.

Much research has been done on witchcraft in Africa during and after the colonial era and its existence has been confirmed even though its implications on the economy in general has not been formally quantified.

The social and political effects of witchcraft has been touched on by some researchers including the Zambian historian Friday Mufuzi, Zimbabwean sociologist Gordon Chavhunduka as well as Vhumani Magezi and Timothy Muyambo relative to the socio-political and religious power dynamics of communities and thus the same findings can be very useful in inferring the economic consequences of this spiritual pandemic on Africa and the globe.

In The Practice of Witchcraft and the Changing Patterns of its Paraphernalia in the Light of Technologically Produced Goods as Presented by Livingstone Museum, 1930s-1973, historian, Friday Mufuzi, highlighted the use material evidence that was collected during witchcraft investigations in Zambia.

The collection of such evidence on the practise of witchcraft, especially western based technologically advanced material that are used confirms not only the existence of the practice but also the fact that the practice maybe getting advanced and modernised with the times.

Unfortunately, in spite of this reality, the victims of witchcraft are left confused and helpless since an evil perpetrated against them is being considered as mere hearsay and imaginary especially from the corners that sought to promote the advancement of western medicine.

This argument is cemented by Gloria Waite, from the Department of History, University of Massachetts, Dartmouth, in her report titled Traditional Medicine and the Quest for National Identity in Zimbabwe.

In this report, Gloria Waite quotes that at one time, the whole practice of witchcraft was considered a pretense and a sham with no real existence as quoted below.

‘’Traditional medicine was also undermined by the Witchcraft Suppression Act of 1899, which criminalized both malpractice and legitimate practice since it subsumed most materials used by healers under the rubric of "witchcraft", even though many of their "charms" have nothing to do with witchcraft. The Act also removed control of witchcraft accusations from traditional courts, assuming "the whole practice of /witchcraft as a pretense and a sham, [with] no real existence at all" (Chavunduka, 1982).’’

This seemingly deliberate and malicious side-lining and oversight on such a critical issue especially for imperialistic economic reasons under the pretext of religion have to a large extent firmly grounded the practice of witchcraft because it subtly let the perpetrators on rampage by somehow criminalising an attempt to effectively address the issue.

‘’The last important problem is that of controlling witches and sorcerers. The suggestion that the only solution to the problem is the abandonment by people of their beliefs in witches and witchcraft makes no sense. It is as if one were to tell a physician engaged in public health work that he could eradicate malaria merely by denying its existence.

Many people in Zimbabwe do not see the problem as one of eliminating the ideas but one of eradicating the witches and sorcerers. As we have seen they are right, at least in part. The Witchcraft Suppression Act has undoubtedly removed the most dramatic dangers to life and liberty.

Diviners and others are now more cautious about imputing witchcraft out of fear of prosecution, and court proceedings have consequently become infrequent. But the Act has also brought other problems in its wake. The main effect of severe sentences has been to drive the practice of witchcraft underground.’’

Witchcraft, just like the abominable act of corruption undermines the glory of merit, natural giftedness and hard work since it can nullify, make vain or unproductive that which is ordinarily meant to produce positive results in the lives of the people in any society.

The return on investment towards personal and corporate development can be embarrassingly low to the victims of witchcraft and there can be little redress because of the indifference on the subject, an indifference predominantly premised on the western colonial grip on Africa.

The time, effort and resources that are invested by people through education, entrepreneurship and other life changing exploits can be rendered null and void and thus draining people of their dreams, hope and energy invested towards personal, corporate and community development.

It is possible to infer that much of the reluctance to accept the existence of witchcraft in Africa either by some western scholars and the religious folk could have been pre-planned for various reasons including the notion that:

Witchcraft is a retrogressive evil science that has gradually and for a long time dropped Africa into a stinking spiritual latrine, whose odor even the perfumes of education and modernisation has failed to quench.

As such, one of the first effective steps to holistically address it is to accept that it is real and that it drastically affects the wellbeing of the people whether they deserve to have been bewitched or not since some people still acknowledge it as form effective punishment against criminal and immoral activities.

However, it is important to note that the people who practice it have an advanced understanding on the manipulation of nature, both earth and the spiritual sphere for selfish interests.

In that sense, to leave so much power in the hands of such spiritual barbarians who do not care about the socio-economic consequences of their evil practise is tantamount to opening an armoury to the mentally challenged.

Witchcraft is a spiritual crime with observable physical consequences on individuals, communities and even the nation at large and yet perpetrated by people who lack accountability whatsoever to the authorities that have oversight on the wellbeing of citizens in a given community.

It is a dangerous phenomenon whose effects on humanity must be viewed in the same trajectory as other horrendous pandemics like Aids and Ebola which needs serious political will, remedial research and commitment to address so that Africa can be pulled from this economic dungeon.

After so much research on witchcraft by some scholars, to refuse its existence and to ignore its effects is to subtly but effectively promote it at the expense of the people, especially the innocent and the youth who aspire to and dream for a prosperous Africa.

One of the reasons behind lack of political will in effectively addressing the issue of witchcraft is its potential for being used as a tool against opponents by competing politicians and other community leaders and thus, its eradication would unfortunately to them demand that they be elected on merit than on a mysterious phenomenon.

The other reason is also the superstitious fear by some political, community and religious leaders to talk about and address the subject because they fear that the relative mysterious powers behind the scenes can unleash horror on them.

More so, the lack of spiritual gifting and insight to address it in the religious folk especially the church which openly and publicly practice with religious passion and excitement rather than spiritual enlightenment and power is a factor behind the failure to effectively deal with this spiritual pandemic.

In a report by Vhumani Magezi and Timothy Muyambo titled Pastoral Challenges and responses to fear of avenging spirits (ngozi) in Africa: A biblical evaluation and response – case study of Shona people,

They say that ‘’the strength of most mission churches is that they seek to address ngozi crises by raising awareness among believers that these are demons. While this theological position on ngozi is biblical, these churches have not yet engaged on a practical level in the ngozi crisis, or learned as much as the authors of this article have through enculturation’’

They further say that ‘’it is critical for mission churches to demonstrate the power of the holy spirit in overcoming the forces of evil spirits’’.

Such an acknowledgement that ngozi (avenging spirits) in this particular case as cited by Magezi and Muyambo is caused by demons and the general inference that I can make on other curses to the same phenomenon shows or points to a spiritual crisis in addressing the related problems.

Even though they used the words mission churches, it is important to note that their observation equally applies even to the Pentecostal movement.

This is because it has greatly impacted the lifestyle of many Christians especially from the religious based motivation and inspiration context while the spiritual bondage of the respective congregants who have not been spared by witchcraft is yet to be witnessed on a grand scale because of lack of spiritual tools and skill to address the matter.

In effectively addressing this pandemic, it is important to accept that institutions that deal with addressing the issues of witchcraft must be duly formalised and be publicly availed just like public hospitals and clinics so that people can professionally and unashamedly access the relevant help and enable the collection of relevant information and statistics for further research.

The necessary preventative solutions and remedies must be publicised so that people can act informed on their spiritual wellbeing since it is part of their collective and total wellbeing in the journey of life.

Brian Kazungu is a freelance journalist and opinion leader.