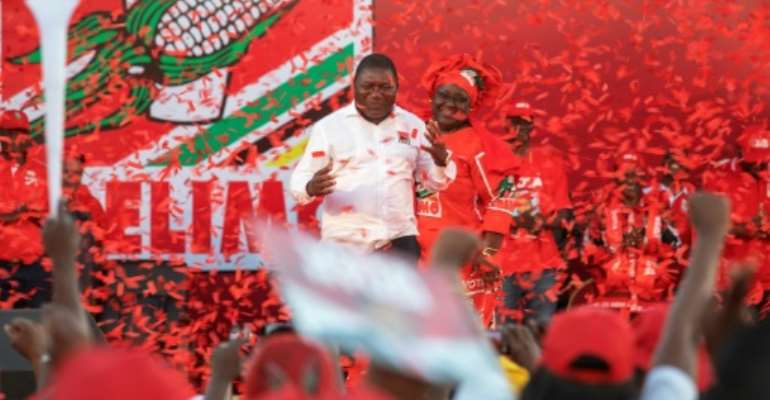 Mozambique holds a general election on Tuesday that will test the country's fragile peace as the Frelimo party, faced with economic crisis and chronic conflict, prepares to relinquish at least some control after 44 years in power.

The impoverished southern African nation has seen one of the most violent campaigns in its brief and turbulent history, raising fears that the presidential, parliamentary and provincial polls could be marred by bloodshed.

Frelimo has ruled Mozambique since independence from Portugal in 1975 and -- barring a major upset -- is expected to again beat it arch-rival Renamo, a former rebel group turned opposition party.

Supporters of Mozambican main opposition party RENAMO hope to win some of the country's provincial governor posts for the first time. By GIANLUIGI GUERCIA (AFP)

Frelimo and Renamo, who fought a brutal civil war from 1975-1992 that left a nearly million people dead, signed a peace deal in August hoping to turn the page on decades of conflict.

But an armed breakaway faction of Renamo has splintered off, rejecting the treaty and threatening to attack campaign events.

"This election will be a test for democracy," said Ericino de Salema of the Electoral Institute for Sustainable Democracy in Africa.

"For the first time, the political geography of the country may change substantially, it may even lead to confrontation."

Under the peace deal, Frelimo will have to loosen its stranglehold on power.

Mozambique's 13 million voters, out of a population of nearly 30 million, will elect provincial governors for the first time -- they were previously appointed by the government -- who will have expanded powers.

How Mozambique ranks compared to other selected nations in southern Africa. By (AFP)

Renamo is expected to gain control of between three to five of the country's 10 provinces.

"For the very first time, the ruling party is facing the risk of losing something... and there is no way they are going to let it go," said Zenaida Machado of Human Rights Watch.

"These elections are on track to be one of the most violent that we have ever seen."

The increasingly bitter campaign has seen candidates threatened, election material destroyed, and clashes break out between supporters of both sides.

The lowest point was the brutal murder of a prominent election observer, with four police officers suspected of being responsible.

Civil society groups have already denounced numerous irregularities, including thousands of "ghost voters" on the electoral roll, and intend to deploy thousands of observers for the vote.

Frelimo enters the election in an unprecedented position of weakness after its worst-ever performance at the ballot box last year, winning 51.8 percent of votes in local elections.

The party's popularity took a hit when it was revealed the government had secretly borrowed $2 billion, sparking one of Mozambique's worst financial crisis.

An armed breakaway faction of Renamo has splintered off, rejecting the treaty and threatening to attack campaign events. By GIANLUIGI GUERCIA (AFP)

For one of the world's poorest countries, which is heavily reliant on aid, the "hidden debt" scandal severely tarnished the regime's image in the eyes of donors and investors.

And the government has struggled to respond to an insurrection by a shadowy jihadist group that has killed hundreds of people in the northernmost Cabo Delgado province since 2017.

President Filipe Nyusi, who hails from the province, has vowed to restore order, but with little success.

The violence has threatened to delay the exploitation of vast gas reserves in the north, which could pose a problem for Nyusi, who has touted future "petrodollars" in his campaign speeches.

Only rising to prominence after the death of long-time leader Afonso Dhlakama in 2016, Momade pushed for the peace deal but has struggled to rally his party behind it, with the breakaway faction threatening to revive hostilities.

With tensions so high, some fear a return to the bad old days.

"Renamo didn't hand over its weapons. It therefore shouldn't surprise anyone if it decides to resort to violence again," warned Machado.

Nyusi, who is running for his second five-year term in office, urged calm as he wrapped up his campaign on the outskirts of capital Maputo on Saturday.

"We call on our supporters not to respond to provocation and to avoid violence," he told thousands of supporters.

At his own rally in the central city of Nacala, Momade pledged that his party would win and "put an end to corruption".

"Let's remove Frelimo from power so we can give Mozambicans back their dignity," he said.