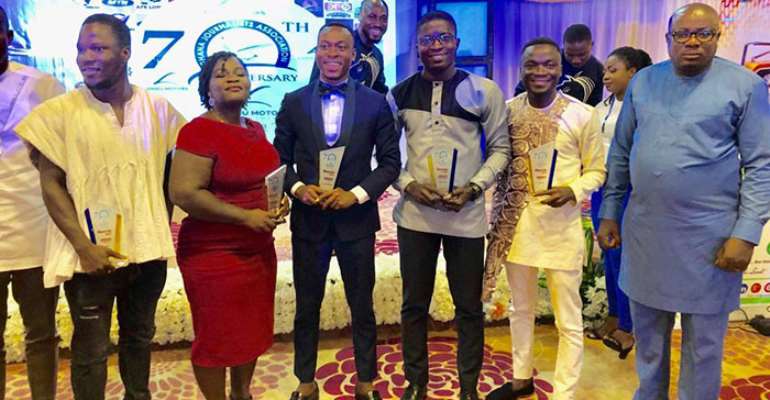 Some of the award winners

Ghana has lost about GH¢1.45 billion (US$290 million) due to poor sanitation, Yaw Atta Arhin, a WASH Consultant, has revealed.

He said a further GH¢395 million (US$79 million) is lost to open defecation which is also linked to inadequate and poor sanitary facilities in the country.

Mr. Arhin made the revelation in Ho during the third Volta Regional Journalists Awards ceremony over the weekend.

The ceremony which was chaired by Nana Soglo Alloh, the Paramount Chief of Likpe Traditional Area, was on the theme: “Environmental Cleanliness: Media as Vanguard, Don't Drop that Litter.”

Mr. Arhin said the financial losses as a result of poor sanitation were linked to inappropriate collection and disposal of waste, inadequate implementation, weak enforcement of sanitation bi-laws, low financing and bad attitude from citizens.

He said government's allocation of GH¢246 million to the Ministry of Sanitation and Water Resources (MSWR) and its agencies was woefully inadequate to deal with the huge sanitation challenges of the country.

He said there was the need to prioritise environmental sanitation and recycling and also mainstream informal waste collectors.

The Deputy Sanitation Minister, Michael Gyato, said that the government acknowledges the enormous task ahead in the effort to make the country clean.

He said that the government was working hard to implement waste separation and other recycling projects, including a partnership with Aker Energy to recycle plastic into diesel.

He commended the Volta-Oti Chapter of the GJA for being the first to launch a Regional Sanitation Campaign and also securing a land to build a media village to accommodate journalists.

In attendance was the Chairman of the National Media Commission, Yaw Boadu-Ayeboafoh, and national executives of the GJA.