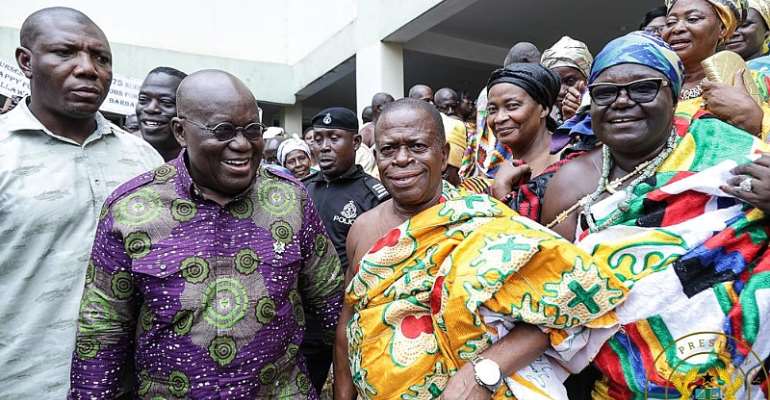 The Chiefs and Queen mothers of the newly created Bono Region have commended President Addo Dankwa Akufo-Addo, for the implementation of the Free Senior High School (SHS) Policy.

They also thanked him for the restoration of the teacher trainee and nursing trainee allowances.

Speaking on behalf of the Chiefs of the Region, Nana Bofo Bene IV who is the Dwenemhene and also the Vice President of the Bono Region House of Chiefs applauded President Akufo-Addo for his passion for education.

“Others said it was impossible. You, President Akufo-Addo, on the other hand, said you will do it. You came into office, and you have done it. You have seen to the realization of Free SHS,” the Dwenemhene said.

He continued, “If no one will commend you for Free SHS, we the people of Bono Region, will gladly do so. Congratulations Nana. Today, a child from a village like Boadwo has been admitted to study at St. James Seminary and Senior High School, as a result of your commitment to broadening access to education.”

Nana Bofo Bene IV made this known on Monday when President Akufo-Addo paid a courtesy call on the Paramount Chiefs and Queen Mothers of the Bono Region, at the commencement of his 2-day tour of the Region.

Touching further on the policy, the Dwenemhene indicated that those who oppose Free SHS have their relatives being beneficiaries of the policy, adding that “those who claim Free SHS is not good have all been shamed”.

“Thus far, from September 2019, 1.2 million children, the highest enrolment of pupils in Senior High School in our history, are benefitting from the policy,” he said.

He also thanked the Akufo-Addo government for the restoration of nursing and teacher trainee allowances, which, he said, has relieved students of untold hardships in the course of their studies.

The Chief also told President Akufo-Addo, through the Ministry for Education, to address issues regarding the categorization of Senior High Schools in the region, and improve the tourist attractions in the region, as it could serve as a source for the creation of jobs and wealth for the people of the Region.