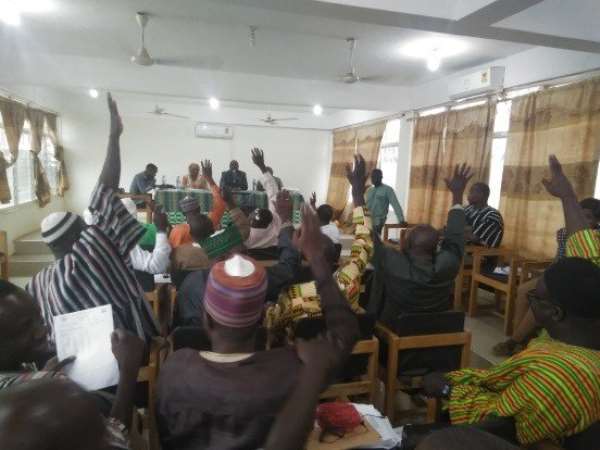 Members of the Bawku Municipal Assembly are calling on government to add the motorbikes given to them to perform their official duties, as their end of service package.

The members said the assembly work was a voluntary one, one that demanded sacrifice to serve their community and they have been performing their duties with their limited resources before the motorbikes were given to them.

“We see it as a good compensation if the bikes are added to our ex-gratia package for the services we rendered our communities,” one of them said.

The unanimous decision was taken at the second ordinary meeting of the Bawku Municipal Assembly in Bawku, Upper East Region, which was convened to discuss and approve the composite budget and also draw an annual action plan for the development of the area.

Hajia Hawa Nincheamah, the Municipal Chief Executive (MCE) for the area, expressed concern on the poor financial performance of the assembly, indicating that it has been able to mobilise only 30 per cent of its financial resources.

She said the poor performance of pupils at both the Basic Education (BECE) and Senior High School Certificate Examinations (WASSCE) has continued to be a source of worry to both parents, students and teachers and there is the need for stakeholders to team up and arrest the situation.

She said the Assembly is planning to organise a stakeholders’ forum to involve the Education Oversight Committee, to address the issue as it was becoming a threat to producing quality human resource in the area.

She lauded government policies on agriculture such as the ‘Planting for Food and Jobs’ and said over 350,216 bags of NPK fertilizer and 81,975 bags of Urea has been sold to 43,622 farmers at subsidised prices while a total of 752 farmers were supplied with various seeds.

She said as part of an extension of the Rural Enterprises programme, (REP), the Assembly has introduced a new initiative called Empowering Novel Agricultural-Led Employment (ENABLE-YOUTH) to encourage young tertiary graduates to own agri-businesses along key value chains, through skills training and internship modules in line with government’s one Village one factory policy.

Mr David Adoliba, the Presiding Member for the Assembly, said there is a need for all assembly members to be appreciated and motivated in order to encourage them to put up their best.

He said the district assemblies ran the local parliament that addresses the immediate developmental issues of the people at the grassroots level, therefore, the need for government and development stakeholders to focus on empowering them.

Mr Adoliba called on members of the assembly who would be retained by their electoral areas to see the need in continuing the unfinished work.