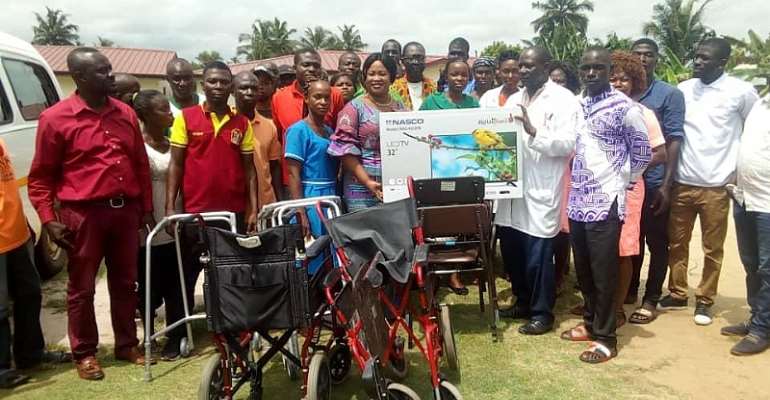 The donation, comes as a result of a pledge made by the Treasurer to the facility during her campaign as a parliamentary aspirant for the NPP in the just ended parliamentary primaries held on Saturday, September 28, 2019.

Miss Horma Miezah who contested the incumbent District Chief Executive (DCE) for the area, Hon. Kwasi Bonzoh for the first time, came second in the keenly contested primaries with 262 votes, whilst the DCE came first with 359 votes and one Mr. Isaac Menlah managed to poll 9 votes to become third.

The Western Regional Treasurer was accompanied by some Constituency and Polling Station Executives on Monday, September 30, 2019 to do the donation to the health centre.

The delegation and donation were received by Dr. Cosmos Ehoneah Ndah, the Deputy Chief Physician Assistant, Mr. Jonathan Blay, Board Member and some nurses and midwives.

Ms. Horma Akaisi Miezah, was taken round the health centre with the team to enable them have a first hand information on the deteriorating facility. Her first point of call was the maternity ward which was in a deplorable state with metal springs in the mattresses openly displayed.

She was also taken to see the ill equipped laboratory and other sessions of the facility.

Dr. Cosmos Ehoneah Ndah, appealed to her to assist them with more equipment and other support to enable them deliver quality health services to the people.

He also thanked the Treasurer for the kind gesture and urged her to do more for the District.

On her part, Ms. Akaisi Horma promised to assist the health facility to the best of her ability and also pledged to provide new mattresses for the maternity ward in the shortest possible time through her NGO, Horma’s Hope for Women Foundation to facilitate work at the hospital.

The philanthropist, therefore seized the opportunity to thank the medical staff for dedicating their lives to help save humanity and encouraged them to continue to provide quality health services to the people of Esiama and its environs.

On his part, Mr. Emmanuel Twemasi, the HR Manager and the Acting Administrator of the facility also thanked her and prayed for her to be successful in her endeavours.

The management of the facility became happy and were very grateful to her for honouring her pledge.

Some of the Polling Station Executives who accompanied her, said they were surprised to see the Treasurer doing this immediately after losing the parliamentary primaries to the DCE.

They described her as a selfless and true leader who shares and recognizes the plight of others.

"Indeed, this single historic brave act of the Western Regional Treasurer of our great party, has demonstrated that her quest for the leadership position had been to facilitate development in Ellembelle. Two days after losing the elections, she still went ahead to fulfil her promise to the people. The people of Ellembelle are indeed lucky to have such a selfless leader in their midst", they said.