Central Africa: Calls For ‘Digital Transformations Here And Now’ In The Air 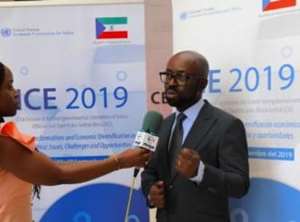 No more talking shops, no more feet-dragging! Now is the time to invest line-hook-and-sinker in the tools of digital transformations, as levers of Central Africa’s economic diversification or miss the 4th industrial revolution and remain in the hall of the least advanced subregion in Africa.

These are reverberations from government officials, senior state functionaries, digital transition policy experts and strategists, private sector representatives and young start-uppers following a five-day content-packed conference convened by the subregional office for Central Africa of the UN Economic Commission for Africa (ECA) and the Government of Equatorial Guinea in Malabo.

They were in the business of sculpting practical templates for an innovative and digitally driven economy for the subregion to be achieved through a radical breakaway from past cycles of meeting-after-meeting on digital strategies which have held sway in the subregion but bagged no real yields.

Host to this 35th session of the Intergovernmental Committee of Senior Officials and Experts (ICE) for Central Africa, on the theme: “Digital Transformations and Economic Diversification in Central Africa: Issues, Challenges and Opportunities,” Equatorial Guinea’s Minister of Economy, Planning and Finance – César Augusto Mba Abogo was forthright:

“We are late for the 4th industrial revolution and we run the risk of becoming mere spectators and consumers of the global economy oriented towards a digital economy,” he warned.

To do this, “we need to create wealth, added value, be more competitive in the global world, develop new industries, and boost entrepreneurship and innovation” he posited.

Taking the cue for the next five days, therefore, participants started by hatching out a ‘digital economy 4.0 framework’ for Central Africa pronged on: public-private partnerships (PPP’s), e-commerce and technological innovations, supported by the optimal use of big data.

Key recommendations
By the time the conference rose on Friday 27 September 2019, these were the key points raised for moving the subregion forward on the path to a digitally-enhanced economy as captured in the meeting’s straight-to-the-point outcome statement:

o Governments of the subregion should make the digital economy a fundamental pillar of economic diversification in national development visions and strategies, ensuring coherence with other macroeconomic and sectoral policies

o Member States should urgently implement the November 2016 Brazzaville Declaration of ECCAS Ministers of ICTs on the effective establishment of a sub-regional roaming system in close collaboration with ECCAS, ECA, ITU and the union of Central African telecommunications regulatory bodies known as ARTAC

o Governments should facilitate and support the establishment of a regional multisector data base to measure countries' efforts towards achieving the SDGs using big-data processing technologies, artificial intelligence and alternative data systems, among others

o Members states, with the ECA’s technical support, should urgently set up a Subregional Digital Technological Hub in tandem with recommendations of ECCAS ICTs ministers made in March 2019 in Brazzaville

o In a similar vein, member States should enlist the support of ECA and the UN Office of Information and Communications Technology (OICT) in association with think tanks and the private sector to establish two pilot technology innovation laboratories in two different countries of the subregion

o The nations of the subregion should initiate and support local and national e-commerce testing platforms to sensitize producers, buyers and governments to the potential of e-commerce in driving the digitally-led economy, and,

The meeting also called for quickening the culture of e-Government, easing SMEs’ access to public procurement, the regular convening of national digital economy dialogues with multiple stakeholders, the promotion of Fintech and the adoption of the Made in Central Africa label (jointly proposed by the CEMAC Commission, ECA and the ECCAS General Secretariat, for proudly identifying quality products from the subregion) once the project comes to fruition.

During the ICEclosing ceremony, Mr. Antonio Pedro, Director of ECA’s subregional office for Central Africa underscored the centrality of digital tools themselves as efficient enablers of government revenue streams as highlighted in this year’s Economic Report on Africa, published by ECA.

He said once, states leverage the use of appropriative ITCs for simplifying, reducing the cost of and speeding up revenue collection in nifty associations with optimal fiscal policies and the smart taxing of hard-to-reach income streams (by establishing digital ID mechanisms, for instance), the digital economy in Central Africa would morph out.

“The time for political dogmatism is over,” said Ms. María del Mar Bonkanka Tabares, Secretary of State in the Ministry of Economy, Finance and Planning in charge of Relations with International Organizations of Equatorial Guinea, as she closed the ICE session with a strong call for Central African countries to set aside egos and integrate to develop the digital economy and march towards sustainable development.

All participants went on stage to energetically endorse the demarche for Central Africa’s “Digital transformation here and now!!!” as their chorus went. (See it here: https://youtu.be/RVpM6mJ5pbU )