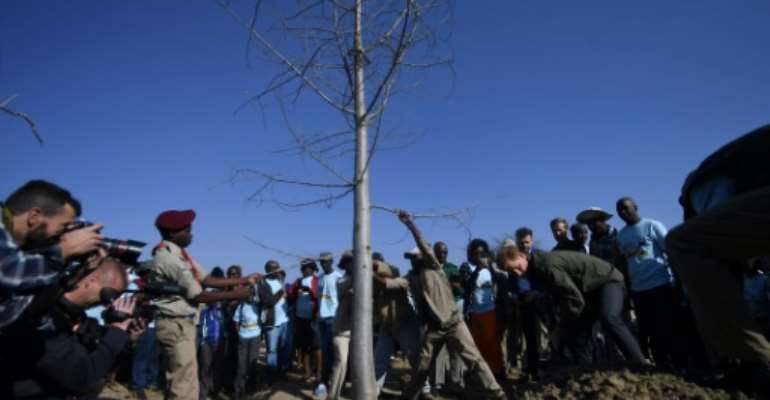 Planting for the future: Prince Harry and Botswanan schoolchildren. By MONIRUL BHUIYAN (AFP)

"There's an emergency. It's a race against time and one which we are losing," the prince told the British television channel ITV as he paid visit to the famous Chobe National Park. "Everyone knows it."

Harry, who is also the Duke of Sussex, said the facts of climate change were now indisputable.

"This week... led by Greta, the world's children are striking," he said referring to the 16-year-old activist who lashed leaders for inaction at the UN climate summit on Monday.

Greeting: Prince Harry and Mike Chase of the conservation charity Elephants Without Borders are given a traditional welcome dance. By MONIRUL BHUIYAN (AFP)

"(...) The most troubling part... is that I don't believe that there's anybody in this world that can deny science, undeniable science and facts, science and facts that have been around for the last 30, maybe 40 years and it's only getting stronger and stronger."

On the second leg of his African tour, the duke joined 200 school children from local primary schools to plant trees in an area that has suffered deforestation from humans and a huge elephant population.

The duke planted a baobab tree -- a species that is beloved in many parts of Africa -- declaring: "If you look after nature, it will look after you."

Local rangers helped Harry drag the 10-metre (33-feet) tree into a hole and fill it with soil.

Patrol: The duke joined an anti-poaching unit on the Chobe River. By MONIRUL BHUIYAN (AFP)

Often called a "tree of life," baobabs provide food and water for animals and shelter for humans, and in many villages are a meeting point where people gather and talk.

The distinctive trees can reach up to 30 metres (100 feet) high and their barrel-like trunks can have a circumference of 150 metres.

They are also extremely long-living, surviving up to 5,000 years -- heat and water stress associated with climate change have placed a question mark of their ability to endure.

Landlocked Botswana is home to the largest free-roaming elephant population in Africa, at over 135,000 -- about a third of the continent's total, and most of them in Chobe, in northeastern Botswana.

Harry has been a regular visitor to the diamond- and wildlife-rich southern African country in recent years.

Royal embrace: The prince gives a youngster a hug at a charity for vulnerable children in Sentebale. By MONIRUL BHUIYAN (AFP)

Weeks after he started dating Meghan, the couple went camping for five days in Botswana and shortly after his mother died, he visited the southern African country.

He told Britain's Sky Television that he had been visiting Botswana over the past 15 years and that the trips give him "a sense of escapism, a real sense of purpose".

He said some of his "closest friends" are in Botswana, a country touted as a beacon of stable democracy.

Prince Harry arrived from South Africa, where he and Meghan began their 10-day visit to the region on Monday.

The prince will travel to Angola and Malawi before reuniting with his family early next week to complete the tour, flying back home on October 2.

Perfidious Asiedu Nketiah and Ofosu Ampofo are imposters in ...
51 minutes ago