Wouldn’t it be devilishly suicidal to send Mahama back to Jubilee House? 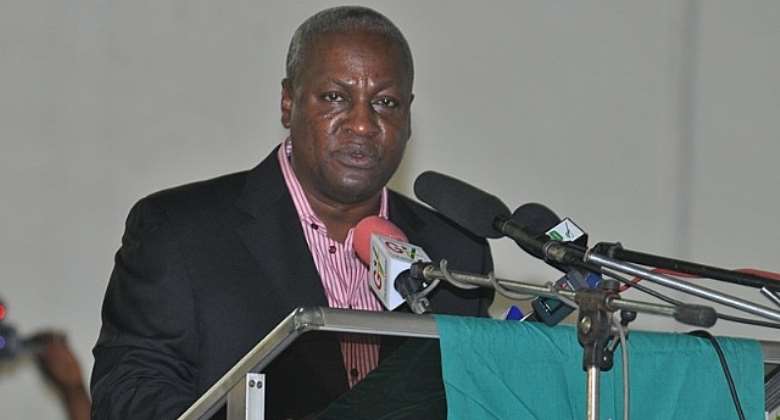 Interestingly, some well-meaning Ghanaians believe that it would be extremely disastrous if Mahama was to reclaim the presidency, given the calamitous errors in judgement which led to the business crippling dumsor amid massive economic collapse (dragged 14% economic growth in 2011 to 3.4%, and 15.4% inflation in 2016).

While some of us really appreciate discerning Ghanaians genuine apprehension over Mahama’s desperate attempt to reclaim the presidency, the NDC loyalists, unfortunately, seem oblivious to the dire consequences of Mahama returning to the Jubilee House.

So why wouldn’t discerning Ghanaians dread and emit grave concerns over the return of a former president who has more alleged bribery and corruption scandals hanging around his neck than any other president in the history of Ghanaian politics?

Let us be honest though, no true nationalist will ever shrill, thrill and clamour for the return of a former president who has serious questions to answer over the puzzling corruption scandals such as the STX housing deal, the Brazilian aircrafts, the Ford Expedition Vehicle and the Armajaro saga.

Take, for instance, somewhere last year, we read that four courageous Ghanaians had petitioned the Special Prosecutor, Martin Amidu to probe into the alleged E.O. Group’s $13 million corporate social responsibility fund towards the development of the Western Region which the petitioners claimed to have been diverted by Ex-President Mahama (See: ‘Mahama diverted $13m E.O. Group money; probe him – Four citizens petition Amidu’-todaygh.com/ghanaweb.com, 18/06/2018).

Dearest reader, why wouldn’t patriotic Ghanaians be alarmed over the return of a former President who can boldly accept a furtive gift of a brand new Ford Expedition vehicle worth over $100,000 from a Burkinabe Contractor called Djibril Kanazoe?

I recall somewhere last year, we were greeted by yet another news of corruption scandal in the erstwhile Mahama administration, this time, an alleged oil money of GH40.5 million secret transfers to the presidency, via the then Chief of Staff (See: ‘Group explains why Amidu must probe Mahama, Debrah in GH¢40.5m BOST payment’; myjoyonline.com/ghanaweb.com, 19/09/2018).

Whatever the case, it beggars belief that despite the wanton corruption, the arrogance of power and the crass incompetence exhibited by the erstwhile Mahama administration which resulted in massive economic collapse, the NDC faithful could still muster the courage to chastise Akufo-Addo and clamour inexorably for the return of former President Mahama.

Given the limitless rot in the Mahama’s administration, some of us cannot help but to giggle over the NDC’s faithful’s renewed zeal to return to power so soon.

Truth must be told though, the critics cannot be entirely correct for claiming that President Akufo-Addo has deliberately worsened the plight of Ghanaians since assuming power on 7th January 2017.

The fact however remains that Ghana under the erstwhile NDC administration experienced massive economic downslide which regrettably brought to pass harsh socio-economic standards of living.

Given the circumstances, it will be extremely difficult for any government to reverse such mess within a shortest possible time.

So, it is somewhat unfair and unreasonable to see the brassbound NDC faithful, who are currently enjoying uninterrupted electricity, low inflation, tax reductions (including import taxes), favourable economic growth, gargantuan savings on free SHS, amongst others gathering the courage to censure the NPP administration.

It is, indeed, extremely baffling to keep hearing such ridiculous misconceptions from the NDC apologists, many of whom only follow narrow party coloration, devoid of patriotism and solicitude.

But then again, one has to contain his/her emotional intelligence, show unconditional deference and composure, for after all, aren’t sycophancy, partisanship and lack of patriotism been our greatest nemesis?

Given the circumstances, we can logically conclude that vague apprehension of patriotism exists in the minds of many Ghanaians, who prefer hero worshipping to defending the national interests.

Thus, some of our leaders, having first-hand knowledge of our servile compliance and hero worshipping gimmicks, tend to take us for granted and continue to provide us with mediocre leadership and services.

We cannot also deny or hide the fact that for well over five years, Mahama’s dumsor, unfortunately, crippled businesses as a result of the mismanagement of the economy.

The annoying and costly buzzing of generators across the length and breadth of the country, disappointingly, went on for well over five years to the utter dismay of the good people of Ghana.

In his desperation to solve the serious problem such as dumsor, Mahama administration could only sign a superfluous ‘Take or Pay’ Power Purchasing Agreements (PPAs) in which Ghana is needlessly paying over $600 million per year for extra power we do not need.

By woefully signing the excessive Power Purchasing Agreements and entering into a calamitous ‘Take or Pay’ deal, Ghanaian consumers are unfairly being forced to pay exorbitant electricity tariffs as a result of the Mahama government’s negligence.

Given the fact that dumsor massively affected the businesses of the diehard supporters of NDC, it is quite ironic that the same people are clamouring for the return of someone who wilfully collapsed their businesses through erratic electricity supply (dumsor).

Gratifyingly, despite the huge economic mess left by the outgone NDC administration, the Akufo-Addo’s government has raised Ghana’s economic growth from a disappointing 3.4% in December 2016 to a favourable 8.6%. And the double digit inflation (15.8 in December 2016) has been reduced drastically to around 9%.

It must, therefore, be emphasised that no economist can undo the huge economic mess created by the NDC government within 32 months into a 48 month mandate.

So, it is quite unfair and incommodious for the NDC loyalists to expect Akufo-Addo’s government to conjure magic and fix the mess so soon when the NDC administration paid GH800 million dubious judgment debt, including the GH51.2 million to Woyome which resulted in the drastic reduction of capital expenditure.

Somewhere last year, I thought I was dreaming when I chanced on the unfortunate news about the misappropriation of $175 million loan facility secured in 2012 which was meant to provide seven district hospitals. But I was not. I was wide awake. The NDC hierarchy indeed misapplied the loan facility on the blind side of Ghanaians.

Why must the brassbound NDC supporters expect Akufo-Addo’s government to use 32 months to fix the 96 months massive mess left by the erstwhile NDC government when the same people surreptitiously diverted $6 million of a government loan facility of $175 million meant to provide seven district hospitals into researching the then governing NDC’s chances of winning the 2016 general elections?

How can we advance as a nation when some conspiratorial plotters keep hiding behind party coloration, devoid of patriotism and rapaciously squandering our scarce resources to the detriment of the poor and disadvantage Ghanaians?

Since the birth of Ghana’s Fourth Republic (from 1993 to present), the nation has regrettably lost billions of dollars meant for developmental projects through unbridled sleazes and corruption.

If the rampant bribery and corruption, the stashing of national funds by some greedy opportunists , the misappropriation of resources and the crude embezzlement of funds meant for developmental projects by some public officials do not warrant criminal charges, then where are we heading as a nation?

Believe it or not, there is admissible evidence of gargantuan bribery and corruption cases, including monies which were given to parasitic creatures who did not render any services towards the national development. Woyome and Akua Donkor come to mind.

A large portion of Ghana’s scarce resources, regrettably, went down the drain due to the mismanagement and the wanton sleazes and corruption perpetrated by the officials of the erstwhile Mahama administration.

In fact, I share in the sentiments of the concerned Ghanaians, who have been maintaining all along that the sins of the two convicts are meagre in comparison with the other scandalous corruption cases which took place in the erstwhile Mahama administration.

In a related development, on 14th March 2018, the State filed a case of causing financial loss against the former Chief Executive Officer of COCOBOD and the CEO of Zeera Group of Companies and Agricult Ghana Limited, who have been accused of embezzling over GH260 million under the watch of former President Mahama.

But in spite of the admissible evidence of Mahama’s government’s unbridled corruption and incompetence, the loyalists NDC supporters would want discerning Ghanaians to believe that the erstwhile NDC government provided exceptional governance.

The good people of Ghana, regrettably, will attest to wanton corruption, incompetence and frequent abuse of power in the erstwhile NDC government.

Take, for instance, but for the Honourable Agyapong’s whistling blowing prowess, former President Mahama’s sibling, Ibrahim Mahama, would have evaded import taxes in the tune of GH12 million. How pathetic?

Delightfully, the EOCO ordered Ibrahim Mahama to pay the GH12 million as all his previous 44 cheques were dishonoured by the respective banks. How bizarre?

As if that was not enough, the Mahama administration revoltingly sanctioned a 30 year bauxite mining lease of around 58% to Ibrahim Mahama and his partners on 29th December 2016, just a little over one week for his brother’s government to exit power. How pathetic?

We should, however, take solace in the fact that based on the prudent governance and the current favourable economic outlook, we can confidently rest assured that Ghana is heading towards the right direction under the able leadership of President Akufo-Addo.

The thoughtful observers have genuine concerns: it will be devilishly suicidal to vote back Mahama into power, given the dreadful errors in judgement which brought about unprecedented harsh socio-economic living standards.