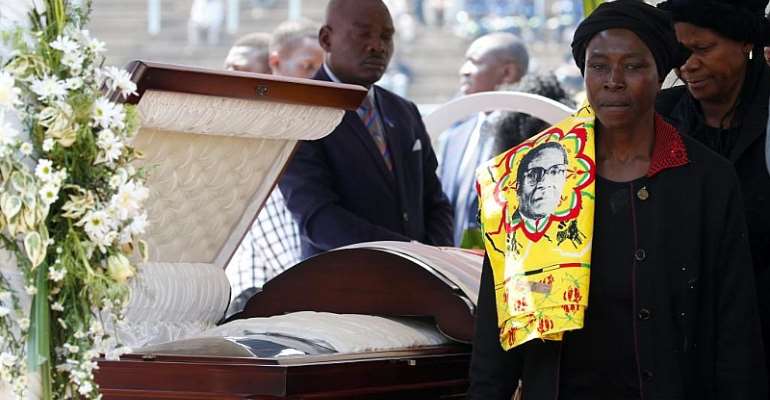 Thousands of Zimbabweans have filed past the open coffin of Robert Mugabe to pay their last respects to the country's founding leader, as a family spokesman reveals the late former president will be buried in around 30 days.

With members of the Mugabe family, including Mugabe's widow Grace looking on, people trooped silently past the coffin lying inside a white tent in the middle of a soccer pitch in Harare's low-income Mbare suburb.

The body of the 95-year-old, which arrived back in Zimbabwe a day earlier, lay in state on Wednesday night at Mugabe's Blue Roof mansion in northern Harare.

Earlier on Thursday President Emmerson Mnangagwa, who ousted Mugabe with the help of the military in 2017, paid his last respects to Grace Mugabe and her family.

"As long as ZANU-PF is in power… he will remain our icon, and our founding father,” Mnangagwa told mourners gathered there.

It was thought that a meeting between Mnangagwa and the family would resolve the issue of where Mugabe will be laid to rest. The president had earlier announced that Mugabe would be buried on Sunday. His government had declared Mugabe a National Hero, which automatically qualifies him to buried at the National Heroes Acre -- a cemetery on a hilltop overlooking Harare.

But family spokesman Leo Mugabe said no burial would take place on Sunday, nor would he say where his uncle would be buried.

Eleven serving African presidents, including Cyril Ramaphosa of South Africa and Uhuru Kenyatta of Kenya, are due to attend a funeral service for Mugabe on Saturday.

Leo Mugabe said the dignitaries would be able to view the body of their late colleague and pay their respects then, but he added: “We are not witnessing the burial on Sunday.”

He revealed on Friday that Mugabe would be buried in around 30 days, but the exact timing has not beed decided.

Another relative, Patrick Zhuwao, issued a statement on Thursday that he claimed had the blessing of Mugabe's widow Grace. He said the Mugabe family was being coerced into accepting a government burial programme that ran “contrary to (Mugabe's) wishes on how he wished to have his mortal remains interred.”

At Rufaro Stadium, the uncertainty over Mugabe's final resting place did not dampen the enthusiasm of those gathered.

Even before the body arrived in the afternoon, long queues of people, controlled by police and military police, formed outside Rufaro Stadium. Supporters, waving their fists and holding up a portrait of the former president, sang, chanted and whistled. Many here, born after 1980 independence that followed a war against white minority rule, still regard Mugabe as a hero.

“I've come here to mourn the founding father of our country,” said Richard, a resident of the nearby Mbare suburb. “I've been supporting him for a long time although he lost his way along the way because he had overstayed in power. But still, I do respect him for the role he played in leading the liberation struggle, so this is the reason I am here,” he told RFI.

Another man, a street vendor who plies his trade in the nearby town of Chitungwiza, said he'd taken the day off to come to Rufaro Stadium to pay his last respects.

“Although so many things happened during his tenure of rule, we still respect him as a leader of our country,” he said.

The government has laid on buses to bring supporters to Harare to pay their last respects. People from five provinces were viewing Mugabe's body on Thursday, while those from the remaining five would have their turn on Friday.

Analysts say that presiding over Mugabe's actual interment is critical to Mnangagwa's credibility, as the former president is still revered by many throughout the continent.

But the president, who turns 77 on Sunday, was quoted by state news agency New Ziana as assuring Grace Mugabe that her family would have the final say on the matter.

“There is nothing we will do to antagonise your decisions,” he said.