Palace of modern Egypt's 'founder' to return to former glory 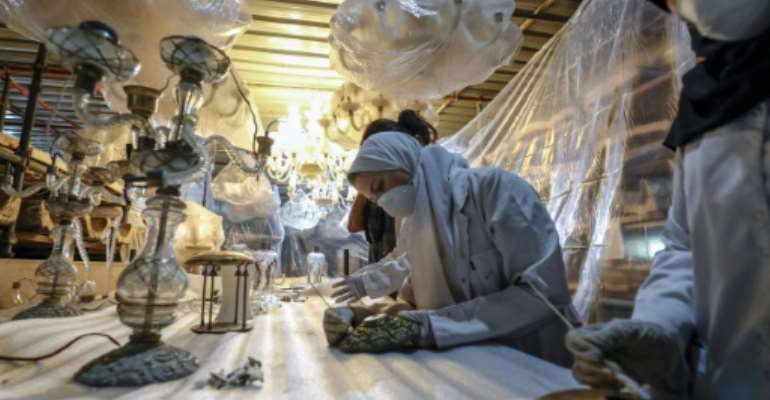 Labourers clean chandeliers during the restoration of Mohamed Ali Shubra Palace in the Egyptian capital Cairo. By Mohamed el-Shahed (AFP)

A once splendid but long dilapidated Egyptian palace built for a trailblazing Ottoman governor is being restored to its former glory and is on course to open next year, according to authorities.

The 210-year-old palace of Mohamed Ali Pasha -- credited with being the founder of modern Egypt -- combined western and Muslim styles of architecture.

Opulently furnished with priceless paintings, high ceilings and stunning chandeliers, much of the restoration process involves the careful cleaning of these delicate artefacts.

Work on the paintings has been particularly intricate.

"Tests were done on the colours until we were able to reach the actual components of the original colours", said Mohamed Sadeq, the site's executive manager.

"We started removing the previous restorations that were done over the years until we reached the original colours."

Significant work has also been required to repair the exteriors of buildings.

A car bomb claimed by an Islamic State affiliate -- targeting a security agency building adjacent to the palace -- exploded in 2015, shattering stained glass and damaging two buildings at the historic site.

Fountains and lush gardens surround the complex -- known as the Mohamed Ali Shubra palace, referencing its location within a Cairo neighbourhood -- and stretch over 59 acres.

"The palace has special significance as it was built using the most advanced methods at the time," said Mariem Youssef, head of the project tasked with renovating the royal residence.

Ali, an Ottoman viceroy of Albanian origin, ruled for nearly half of the 19th century.

He overhauled Egypt's assets -- from agriculture to the military -- and set up its infrastructure.

Over time his palace has disintegrated, like many historic buildings in Cairo.

"The wood inside has aged," said Youssef, noting also the effect of the 2015 blast.

Egypt's multiple historical monuments and buildings are a major draw for tourists, but the country has often faced accusations of neglect of cultural heritage sites.

The cost of the restoration effort at Mohamed Ali's palace is around 195 million Egyptian pounds ($11.9 million, 10.8 million Euros) and the Ministry of Antiquities says the site is on course to re-open in June next year.