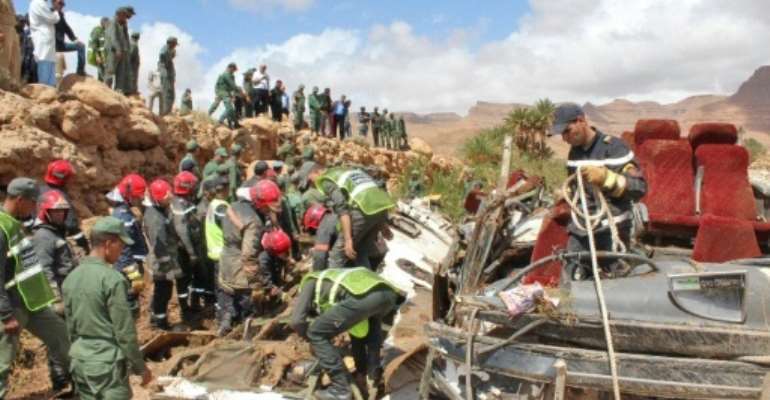 Moroccan rescuers search for bodies after at least 17 people were killed when flood waters overturned their bus in the country's southeast. By - (AFP)

At least 17 people were killed in Morocco when flood waters overturned their bus in the kingdom's southeast, authorities said Monday.

Rescuers have been searching for bodies since the accident Sunday, when the bus flipped on a bridge in a valley near the city of Errachidia, authorities said.

They said a further 29 passengers, with various injuries but in "stable" condition, had been transferred to a hospital in Errachidia.

Rescue workers were continuing their search, after six dead passengers were initially found at the site and another 11 in the relief operation.

The bus driver, who had at first had been counted among the missing, turned up Monday at the hospital and was being treated under police guard ahead of questioning, local officials said.

Wounded passengers, interviewed by Medi1TV from their hospital beds, told of their ordeal.

"We were on the road when, all of a sudden, we were surrounded by water," a woman said, while another said: "The bus couldn't go forwards or backwards anymore, it just toppled over."

Morocco has been hit by violent storms this summer, sparking flash flooding in its mountainous interior.