Can DR Congo leaders keep their pledge of free school? 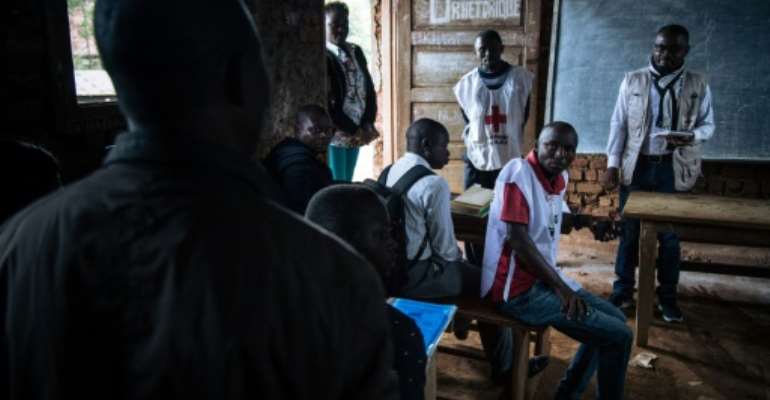 Many children in DR Congo are deprived of school as parents cannot afford the fees. By ALEXIS HUGUET (AFP/File)

While youngsters began a new primary school year in DR Congo this week, many parents were left to wonder whether authorities will keep a costly vow to make tuition free.

President Felix Tshisekedi, who took office in the Democratic Republic of Congo in January, pledged to allocate $2.6 billion (2.37 billion euros) to primary education, or 40 percent of the vast country's annual budget.

His promise concerns more than 50,000 state primary schools and will affect millions of children so far deprived of education because their families cannot afford the fees.

The sums paid by parents include not only the costs of admission and facilities, but also teachers' wages.

Can the government cover these costs?

"I don't know." Though he cut the symbolic ribbon to inaugurate a new primary school in central Kinshasa on Monday, Tshisekedi acknowledged that he could not say that his pledge had been carried out across sub-Saharan Africa's biggest nation.

"This will be a measure that will be truly definitive and universal in a few months," the president later told AFP on the sidelines of talks with UN Secretary General Antonio Guterres.

"We took things as they came. We had no government, no budget. This will be done. It's my primordial goal," added Tshisekedi, who in August named a coalition government including allies of his predecessor Joseph Kabila.

"The Congo is capable of raising such a sum. And we will do it."

The stakes are high when half of the 80 million Congolese are aged under 20, but the World Bank has justified some optimism on growth and finance.

"With 80 million hectares (200 million acres) of arable land and over 1,100 listed minerals and precious metals, the DRC has the potential to become one of the richest economies on the continent and a driver of African growth -- if it can overcome its political instability and improve governance," the bank wrote in an overview updated in April 2019.

The World Banks says the mineral rich country has the potential to become one of the richest economies in Africa. By GRIFF TAPPER (AFP/File)

But the former Belgian colony has been plagued by the most deadly conflicts in Africa since the 1990s, while ongoing violence divides communities and contributes to an unstable climate where corruption can flourish, notably in the mining business.

In 2018, government debt accounted for 14.47 percent of a gross domestic product of $72.2 billion, according to an estimate by the International Monetary Fund, while annual GDP per capita was put at $814. Some 73 percent of the population live in extreme poverty, the World Bank said, the second worst rate south of the Sahara.

In Kinshasa, the capital city of approximately 10 million people, two state schools visited by AFP appeared to have turned free education into a reality.

A boost for meritocracy

"Dear parents, learning is free," a poster announced at the entrance to the 1 Ngaba primary school in a working-class district.

Some parents are wary about whether the schools will charge parents or not. By ALEXIS HUGUET (AFP/File)

"A down payment of 20,000 Congolese francs I had to pay has been returned to me," said Isabel Kyese, a seamstress who came with three children, delighted at the refund.

"This was an enormous burden because of our feeble income," she added.

"The pupils aren't going to pay anything," said Jean-Claude Katemboue, head of the EPA 2 school in Gombe, a wealthier residential district.

"I paid nothing and we weren't asked," mother Mami Minga said, her children, aged six and 10, in tow.

A father in Banalia near the northeastern city of Kisangani was cautious. "I'm going to find out if free education is for real before sending my kids to school," he said.

The primary education ministry has announced that classes will be free in the schools where budgets have been drawn up, totalling 30,773 out of 51,574, according to official figures.

Headmaster Kitemboue was gratified at the prospect of being paid by the state rather than parents. "It will raise standard of education and give worth to the teacher."

"When parents support teachers, it can happen that we favour the children of those who pay well," said a technology teacher, Ados Nsimba. "Meritocracy is going to take charge."