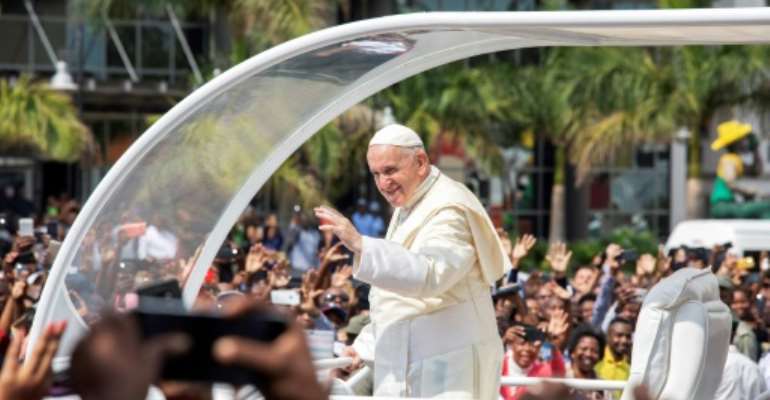 The pope is in Mozambique as the start of a three-nation African tour. By GIANLUIGI GUERCIA (AFP)

Travelling nearly 2,000 kilometres (1,200 miles) by motorbike, train, car and plane over four days to see Pope Francis may seem gruelling, but for pilgrim Davide Hilario the trek was simply a reaffirmation of his Catholic faith.

"This is the first time in my life that I have made a trip of this magnitude," Hilario said, as he awaited the pontiff in the Mozambican capital of Maputo.

"I didn't even sleep because of the excitement," said the 31-year-old, wearing a linen shirt with Francis' face on it.

Preparations for his odyssey started seven months ago after Mozambique President Filipe Nyusi visited the Vatican and announced the pope's visit upon his return.

Francis, the first pope to visit Mozambique since John Paul II in 1988, arrived in the country on Wednesday as part of a three-nation tour that will also take in Madagascar and Mauritius -- some of the poorest nations in the region.

Hilario was chosen by his fellow congregants at Nosse Senhora Aparecida parish, in a remote rural area in the far northwest of the country, to go and hear the pope's message first hand and relay it back to the church.

Thousands are expected to attend a mass by Pope Francis in the Mozambique capital of Maputo. By GIANLUIGI GUERCIA (AFP)

He is one of hundreds of Catholics similarly selected by their local churches in the vast southeast African country to make the expedition to Maputo.

"But I had to prepare my spirit by praying," he told AFP at a centre for the pilgrims. "We also prepared some songs to welcome the pope".

His trek began on Saturday morning at 6am sharp, when he rode a motorcycle to his local train station in Cuamba, some 300 kilometres (200 miles) away from the provincial capital of Niassa.

He then endured an 11-hour train ride to the city of Lichinga where he stayed with a local Catholic family who opened up their home to pilgrims heading to Maputo, where the pope was to say mass on Friday at the giant Zimpeto stadium.

"The train ride was good but really intense... Myself and other pilgrims were praying, singing and celebrating this event in the train," he said.

But it was still the largest chunk of travelling costs for Hilario, an administrator at the department of education, and he had to save every metical to be able to afford the journey.

His wife of nearly a decade, who handles the family's finances, made it clear that while she supported his journey, there was simply no additional money to spend on luxuries for the once in a lifetime trip.

The father of three has been a devout Catholic all his life. He embarked on the long journey with a small red suitcase packed with some trousers, two pairs of shoes and a rosary.

Traditional dancers greeted the pope on his his arrival at Maputo International Airport. By GIANLUIGI GUERCIA (AFP)

Many other Catholic families have hosted the pilgrims, opening their homes.

"The fact that these are our Catholic brothers and sisters, it makes it easy for us to welcome them into our homes without fear despite all the evil going on in the world," said Rodrigues Baso, whose family hosted Hilario.

"Davide is a little bit shy but it's a great experience having Davide at our home, we share our different experiences as we are from different backgrounds."

Hilario, who will be attending the mass on Friday, said "the pope himself symbolises peace."

The visit comes a month after Mozambique's government signed a historic peace treaty with the former rebel group Renamo after a 16-year civil war that claimed a million lives, many from hunger.

"Here in Mozambique we are really going through hard times and we need the presence of the pope to seal this peace and bring hope to us so that we will believe again that peace is here to stay".

The country, one of the poorest in the world, is also reeling from a cyclone in March that struck the eastern region of Beira, killing more than 600 people and wrecking homes, businesses and crops.