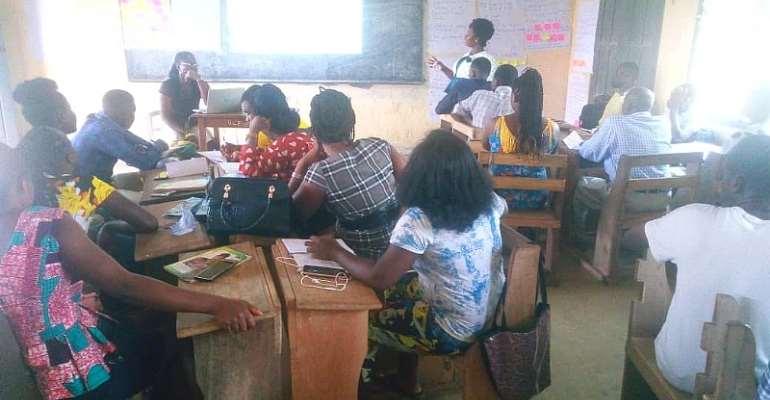 The Municipal Director of Education in Wenchi Mrs. Effua A D Amuah has said that the introduction of new curriculum in Ghana’s educational system was timely.

She said the country had undergone a lot of changes over the years and all these had had influences on our educational system as a country she lamented.

She said this at this week’s training workshop been organized by the Ghana Education Service to train private school teachers on the new curriculum in Wenchi municipality.

A total of 350 teachers in 28 private schools in the municipality are expected to be trained by the end of training this week.

She said 891 teachers in the public schools across all circuits in the municipality have had their training.

She warned that any private school that refused to participate in the training would be closed down because they will not have any basis to teach the pupils she stressed.

Both content and methodology have change therefore without the training it would be difficult to be at the same wave length with the trained, she further explained.

Mrs. Amuah gave an assurance that there will be continuous monitoring and supervision at the various schools to see how knowledge acquired was been implemented.

She however thanked the proprietors and managers of the schools (Private schools) for their cooperation in the exercise.

Soft copies of resource packs are currently available to the private schools for use.

On the issue of why Private schools were seen to be doing better in terms of performance in the basic schools as compared to the government schools the Education Director noted that poor supervision on the part of heads and circuit supervisors in the public sector was a contributing factor.

She said proprietors and heads of private schools were always seen as been on the nerves of their teachers to ensure that they were doing the work whilst in the public schools there were a number of bottle necks impeding monitoring and supervision.

She urged teachers to continue to give off their best to raise world future leaders who could address the world’s problems during their time.

Mrs. Effua A D Amuah thanked the Ministry of Education for the introduction of the new curriculum to enhance teaching and learning in schools.