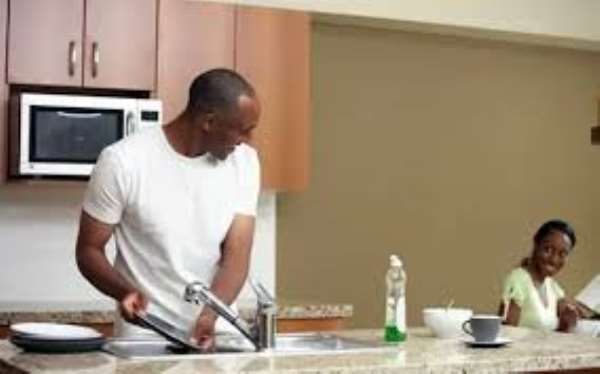 A medic and Director of the Paradise Home Clinic and Home Care in the Ashanti Region, Dr. Charles Krampah has indicated that men who are committed to religiously partaking in household chores; tend to perform better in managerial roles in the corporate circles.

He made the assertion speaking at an All Male Ignite conference held by the No Business As Usual Project in the Asokore Mampong Municipality of the Ashanti region.

The event hinged on the theme “Challenging Perceptions about the Roles of Men In 21st Century,” called for men to show greater commitment to supporting home-keeping activities which have hitherto been the roles of females.

Guest speaker, Dr Charles Krampah took it hard on traditional gender stereotypes that insulate men in several societies from household chores insisting that the trend is to blame for the failure of Ghanaian businesses to thrive beyond generations.

He explained, “When men share the responsibilities of the chores of the home, .you empower yourself and it helps you to focus on your business because if your home is taken care of, all other things will be taken care of,”

Relating the concept to business continuity, he stated that “In Europe, several homes cannot employ the expensive services of house helps so the men share in the domestic chores while doing their businesses. After death, their businesses continue because their children are well trained and they are in a good capacity to take care of the home.”

“In Ghana, we don’t have generational businesses because if the man’s focus is only on the business and not taking care of the home, in your lifetime the business will thrive but you will not have successors,” he warned.

Dr Krampah would however not buy the idea of women taking up the major roles of paying for the recurrent expenses of the home insisting that relegating that role to women could spring up unhealthy family conflicts.

Programs Manager with the NBU Project Daniel Okiti Boama told Ultimate News, the project is aiming at causing a positive revolution in the behaviour of men in the highly stereotyped communities of Asokore Mampong.

He however admitted it would not be an easy task breaking the entrenched perceptions about the manly roles in the Muslim and Northern settler dominated Municipality.