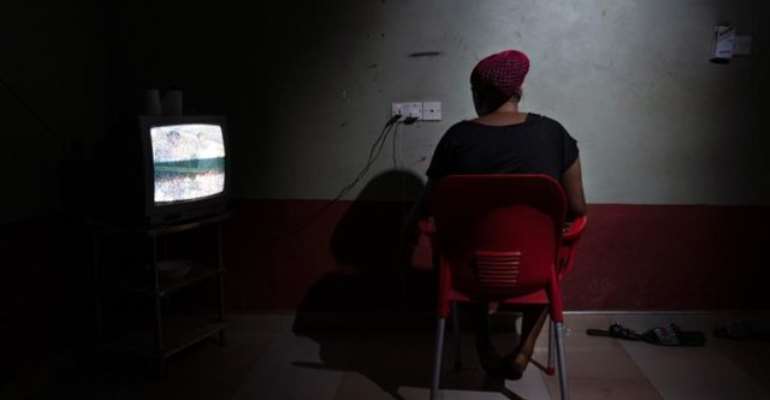 Blessing, a 26-year-old from Nigeria, inside the guesthouse where she lives with other 20 women who were also forced into prostitution [Francesco Bellina/Al Jazeera]

Kumasi, Ghana - Jennifer* has spent the last few weeks on the pavements of Vienna City, a hub in Kumasi, Ghana's second-largest city, which has a bustling nightlife.

She arrived in Ghana in May, having left a crowded hostel room in Lagos, Nigeria , hoping to secure work in sales or as a waitress and send her income to her mother in central Nigeria's Ondo State.

But after a one-day bus trip from Lagos to Accra, her dreams crumbled as she reached the green hills of Kumasi.

"Please, get me out of here, this life is devastating," she said.

"They put me immediately on the street, forcing me to prostitute from 8pm till morning, every day,'' she said in a bar on Harper Road, where Rihanna's songs crackled through an old sound system as other Nigerian women outside dressed in revealing clothes waited for clients.

Most of her money goes back into the "system" - to a "madam", a Nigerian woman, and middlemen such as hotel managers.

Women and girls like Jennifer, with some as young as 14, are victims of a trafficking network that benefits several people from Nigeria to Ghana.

The old district of Dichemso, the heart of the business, lies on the opposite side of Kumasi's city centre.

"Dichemso is where Kumasi's sex industry is flourishing, thanks to different guesthouses and hotels, such as the Plaza," said Bright Owusu, an independent researcher who has spent the last three years meeting Nigerian women forced into prostitution in the city.

Twenty Nigerian women live at one of these guesthouses, which is controlled by a few men at the entrance.

Locked in her room, 26-year-old Blessing* shared her experience.

"I am the oldest of five sisters and brothers: when our parents died, I knew I had to take care of them,'' she said.

Local middlemen convinced her to leave Lokoja, in central Nigeria, to Ghana.

In Kumasi, "they introduced me to a woman, who brought me to a fetish priest and told me I owed her 8,000 cedis [about $1,500] for my transportation: I had to prostitute to pay that sum back".

A woman undergoes a 'liberating' ritual during a religious ceremony at a pentecostal church in Kumasi, Ghana [Francesco Bellina/Al Jazeera]

In some African countries, a "fetish priest" serves as a mediator between the spirit and the living.

Blessing refused, and ran away.

Soon after, she received death threats in messages to her phone. "The madam said the priest would throw a curse against me, but I didn't want any debt,'' she said.

After working for four months at a local market, for barely $30 a month, Blessing ultimately turned to prostitution as the only way to pay college fees for her younger sisters.

In one year in Dichemso, she said she has met dozens of women with similar experiences.

"Every day, Nigerian girls enter Ghana, undergo voodoo rituals and are put into prostitution, and nobody seems to care," she said.

"Through rituals, madams make sure that you'll pay back a debt," said Blessing.

Owusu, the researcher, explained: "Some of these women know they'll be coming for prostitution, but they don't know that once here, they'll lose control over their life."

"They are the most powerful bond, one that has a strong psychological impact," he said.

Victoria Klimova, a project coordinator at the International Organization for Migration (IOM) in Ghana, said that national authorities do not have complete information on sex trafficking.

However, according to Al Jazeera's interviews and research, it is estimated that there are at least hundreds of Nigerian women working as prostitutes in Ghana.

Late last year, IOM launched a programme aimed at creating comprehensive data on sex trafficking and labour exploitation in Ghana, and to support the government's 2017 strategy to combat the problem.

According to the US Department of State, a trafficking investigation which opened last year has seen just three people convicted.

Out of 49 women identified as potential victims of sex trafficking, 46 were Nigerian, and 22 were underage.

The Ghana Immigration Service (GIS), a state agency, in part supported this investigation.

Alberta Ampofo leads its anti-smuggling operation, which is propped up with European Union funds.

She said some "rescued women" are living at Ghana's first shelter for trafficking victims, which opened in February.

"They should cooperate in investigations, before being returned to their families," she said.

"Victims of sex trafficking are in all corners of Ghana and much has yet to be done, but there's more awareness among the population and authorities, and that's a good start."

But Ampofo said that GIS is not prosecuting fetish priests.

"How can a priest know that a Nigerian lady is a victim of trafficking, if the madam simply presents her as an employee?"

However, this is not the case of Nana Badu, a renowned prophetess in Kumasi.

In a small room in her house, there are wooden statues of oracles, bowls and bottles.

Her oracles, she said, "can give strength, bring children, make business flourish or protect from enemies".

She added that madams "come for protection so that the police won't stop their girls at the border, since I have a medicine that prevents police from seeing you".

To "help" trafficked women pay back their debts, she claimed that she is able to foster "bonds" between sex workers and employers.

"If a woman tries to escape, the oracle will put the police on her back, to arrest her,'' said Badu.

Finally, when the debt is repaid, the madam returns with the sex worker and Badu reverses a ritual to release the victim.

None of the five women Al Jazeera interviewed in Kumasi, who hailed from different Nigerian states, was aware of a 2018 edict that dissolved all these oaths, led by the influential Oba, or traditional chief, of Benin City - one of the main origins of Nigerian women trafficked to Europe.

"Traditional priests feel they are somehow untouchable here, even by authorities,'' said Owusu.

Still, their services appear to play a key role in a system that exposes Nigerian women in Ghana to daily risks, as tragically confirmed in May with the murder of a 25-year-old woman known as Nina.

"I remember her receiving a call from a client and smiling," said Blessing, who knew Nina well.

Days later, the woman's body was found outside of Kumasi. Two men were arrested for the murder.

"We collected money for the burial and called her parents back in Nigeria," said Blessing. "They had no idea of what their daughter was going through here."