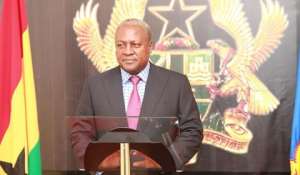 No one can deny or ignore the fact that Mahama is one of the luckiest politicians in the contemporary Ghanaian politics.

In fact, Mahama admitted after the sudden and inexplicable death of President Mills that he was extremely lucky and most grateful to the late Mills for giving him the opportunity to superintend over Ghana’s economy from 2009 to 2012.

Of course, Mahama was the vice president between January 2009 and July 2012.

Thus, per Ghana’s governance structure, Mahama, as the then vice president, was responsible for Ghana’s economy.

In view of the preceding exposition, the Ashanti Regional Secretary of the NPP, Sam Payne, was absolutely right in pointing out during the Wednesday 28th August 2019 edition of Peace FM’s Kookrokoo political show that Mahama has presided over Ghana’s economy for well over 8 years since the inception of Fourth Republican Constitution in 1993.

This article thus seeks to grub into the state of Ghana’s economy in the 8 years under former President Mahama (as the vice president and president).

Apparently, the sceptics have been contending somewhat earnestly that despite being in power for nineteen years, the NDC founder, former President J. J. Rawlings, could not initiate any meaningful policies and programme to improve on the socio-economic standards of living of Ghanaians, but only managed to destabilise Ghana’s macroeconomic indicators.

Unsurprisingly, therefore, when President Kufuor took over the mantle of presidency on 7th January 2001, he encountered insurmountable difficulties in running the country as there was not much funds left in the national purse to plan anything substantial.

Ghana was then declared as Highly Indebted Poor Country (HIPC). The newly elected President Kufuor had a tough decision to make, by either accepting or rejecting the HIPC status.

However, the forward thinking President Kufuor chose to ingest an insipid pill with a view to shrugging off the insidious ailment.

President Kufuor rightly assented to the HIPC status in 2001.

As a consequence, macroeconomic indicators begun to stabilize and Ghana’s debt stock was significantly reduced by about $4 billion within that period (BOG).

In fact, it would not be an understatement to point out that former President Kufuor’s pragmatic policies and programmes reaped tremendous results.

But due to time and space constraints, I will only delineate a few of his wonderful achievements during his tenure in office.

If we stroll down memory lane, three years after the Kufuor’s NPP government had worked tirelessly and discovered oil in commercial quantities, the NDC government led by the late President Mills only had the easiest job of turning on the valve at an offshore platform in December 2010 to pump the first commercial oil.

Ghana then took its rightful place among the petroleum exporting countries. And believe it or not, Ghana started to export crude oil which boosted the economic growth.

Ghana’s GDP grew exponentially from $28 billion to a staggering $47 billion by 2011.

Regrettably, however, following the sudden and mysterious death of President Mills in July 2012, Ghana’s economy took a precipitous nosedive.

Take, for example, during the 2012 electioneering campaign, the late Mills successor, Ex-President Mahama, and his NDC apparatchiks went haywire in their desperation to retain power.

Thus they wilfully broke all conventions. Many government departments spent over and above their allocated budgets.

The GH9.5 billion debt former President Kufuor and his NPP government left in 2009 ballooned miraculously to GH122.4 billion as of December 2016 with nothing or little to show for.

Moreover, President Mahama’s government nauseatingly dragged the economic growth from around 14%in 2011 to around 3.4% as of December 2016.

Unsurprisingly, therefore, during the epoch of Mahama’s coarse governance, some concerned patriots like Jake Obetsebi Lamptey of blessed memory lamented: “Ghanaians are worried because the economy is being handled in a manner reminiscent of the NDC’s mishandling of the economy in 2000. We do not need to return to HIPC status.”

Ex-President Mahama, as a matter of fact, did not work his socks off to improve on the socio-economic living standards of Ghanaians.

Take, for example, former President Kufuor worked strenuously and quadrupled Ghana’s GDP to a staggering $28 billion in 2008, and the late Mills inherited oil in commercial quantities and managed to increase the GDP to $47 billion by 2011.

However, President Mahama disappointingly dragged the GDP to an incredible $40billion as of December 2016.

Delightfully, despite the huge economic mess created by the outgone Mahama government amid stunted economic growth, the Akufo-Addo’s government has efficiently raised the economic growth from a disappointing 3.4 % as of December 2016 to a favourable 8.6 % within a short space of time.

Again, the NPP government has dramatically reversed the inflation rate to a single digit-around 9%from a little over 15 %as of December 2016.

Evidently, Ghana’s economy under former President Mahama has never been so good.

The author has 872 publications published on Modern Ghana.