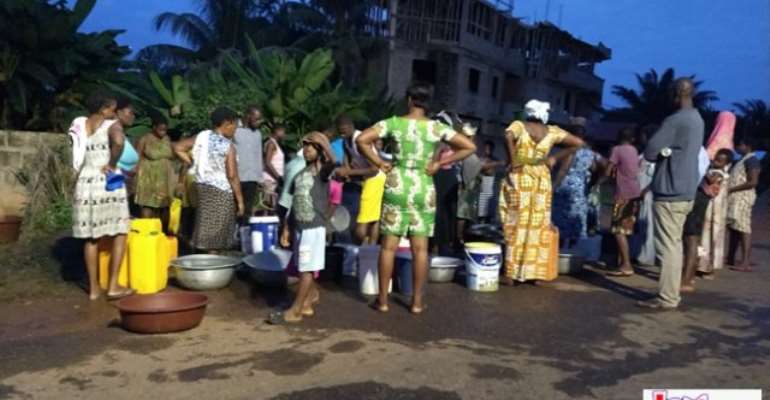 Residents in Ho Municipality of the Volta Region, have been without potable water for past 10 days, as a result of the damage caused to the main pipeline that conveys water from the production point at Kpeve.

According to officials of the Ghana Water Company Limited, the damage was occasioned by the washing away of two concrete pillars holding the pipeline at river Tsawe near Akrofu.

Many residents have resorted to fetching water from almost dried up streams, wells and boreholes that are constantly running out because of the pressure on them as a result of the number of people fetching these sources of water.

The situation is having a toll on productivity as workers are forced to queue for hours to fetch from these streams, wells, boreholes and any available sources of water.

"I go work, say, 10 or 11am because I have three kids in the house and I have to get water to bath them, take them to class before I go to work. If the water I got in the morning is not sufficient, I got to close early." said a resident, Maxwell Budu.

Households are under pressure as chores that require water are deferred over and over, with serious implications for sanitation and hygiene.

"To wash, to cook, you have to fetch water. If you have extra water, you have to think of how you flush your washroom, and after flushing, would you have some to bath the children,” another resident, Pearl Grunitzky laments.

Even though it is an unfortunate development, taxi drivers are cashing in on the situation as helpless residents seek their services to get some gallons of water. The popular yellow gallons known as ‘Kuffour gallons’ have become a regular feature across the municipality.

Efforts by the Ghana Water Company to resolve the challenge has even resulted in the death of a technician. The deceased got drowned in the Tsawe river close to which the broken pipeline was.

The police are currently investigating the circumstances leading to the drowning of the deceased, Christopher Somey, 28, who was in the company if two others during repair work at the site.

The water shortage described as the worst in over 30 years, continues to persist as deadlines given the water company passes without water flowing from the taps.

In a phone interview, the Regional Chief Manager of the GWCL, Joseph Nkrumah, promised that water supply will be restored by Monday, August 25 but that has yet to be fulfilled.

Residents are getting weary as all sources of water they are resorting to are drying up.

They have come to their wits end in search of water.