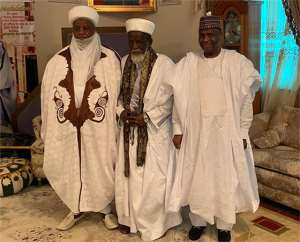 The National Chief Imam, Sheikh Osman Nuhu Sharubutu, was hosted by the Governor of Sokoto State of Nigeria, Aminu Wazir Tambuwal, in the state capital.

The Chief Imam was in the Nigerian state at the invitation of both the Governor and the Sultan of Sokoto, Muhammadu Sa'adu Abubakar to witness the wedding of the latter's daughter, as a special guest of honour.

The Chief Imam's spokesperson, Sheikh Armiyawo Shaibu told DAILY GUIDE in a telephone chat from Sokoto that “the cleric was accorded a high level courtesy by the state governor. The guest and the host held a joint prayer upon arrival. A historical tourist trip took us to the graveside of the legendary Othman Dan Fodio. We also prayed at the mosque of Dan Fodio.”

The spokesperson said he was impressed with the outstanding simplicity of the practice of Islam by the people of Sokoto adding, “Besides the brevity of the Friday congregational prayer sermon, all remained seated after the prayer. A selected elder in the congregation was chosen to say a prayer during the session, something I find impressive.”

The visit above all, he said “rejuvenated the historical ties between the people of Sokoto and their Ghanaian counterparts.”

In pre-colonial times and during colonialism thriving caravan trade link existed between the people of Sokoto and Salaga in the Northern Region and before that Kete Krachi.

The National Chief Imam exchanged pleasantries with important dignitaries such as the Emir of Kano and former Governor of the Central Bank of Nigeria (CBN) Muhammad Sanusi Lamido II, The Chief Justice of Nigeria, the IGP of Nigeria and other emirs from the northern part of the federation.

Sheikh Osman Sharubutu was given the rare opportunity to close the socio-religious activity with special prayers for the Sultan of Sokoto and the Federal Republic of Nigeria.

The Sultan is the President-General of the Nigerian National Supreme Council for Islam (NSCIA).

Vice President Mahamudu Bawumia was said to have played an important role by directing the Ghanaian mission in Abuja to render the Chief Imam and his entourage with the necessary diplomatic support.