Hon. Naana Eyiah underlined facelift projects to better the lives of the people in her constituency 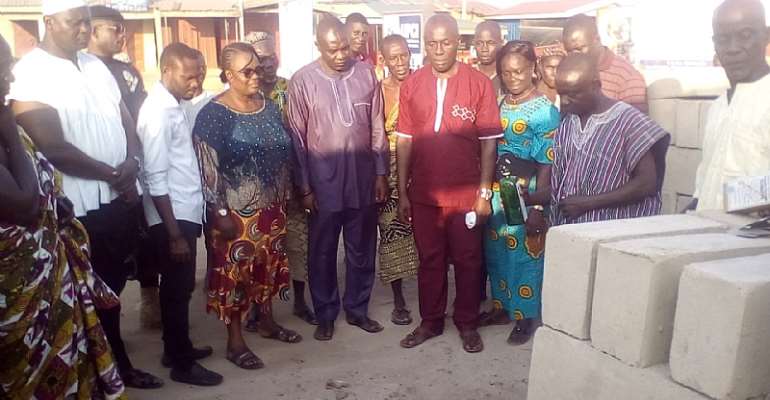 Hon. Naana Eyiah, Deputy Minister for Land and Natural Resources who is also the Member of Parliament for Gomoa Central Constituency has announced a number of projects that are being undertaken for Chiefs and people of Gomoa Pomade to improve their living standards.

According to Hon Naana Eyiah, the projects which includes completion of Police Station to beef up Security in the area, extension of water and electricity supply to cover outskirts of the town as well as construction of 6-Unit classroom Block for the local Basic School among other things

As part of her community engagement programmes, the Member of Parliament stated at Gomoa Pomadze last Sunday that it has been her desire from day one to work hand in hand with Nananom and opinion leaders in various communities to see how best the lives of the people could be improved.

Hon Naana Eyiah noted that this collaborative effort assisted by DCE for Gomoa Central Hon. Benjamin Kojo Otoo has yielded results looking at the number of development projects being undertaken in the constituency.

" I have always commended Chiefs, Elders as well as opinion leaders in the Gomoa Central Constituency for their numerous support towards infrastructure development.

Over the past two and half years, Gomoa Central Constituency has seen a number of development projects aimed at improving the lives of the people thanks to His Excellency Nana Addo Dankwa Akufo Addo led NPP government.

Series of projects have been sited in almost all the communities. I have personally support self-help projects with trips of Sand and stones, bags of cement, roofing sheet and other building materials for early completion of all self-help projects in the constituency"

Hon. Naana Eyiah further stated that the police station at Gomoa Pomadze which was abandoned by the previous NDC government has been awarded on contract and would be completed by the closed of the year.

She also hinted that 6-Unit classroom Block for Asebu-Pomadze Basic School has also been awarded on contract to ease congestion in the classrooms. Hon. Naana Eyiah further stated that plans were far advanced for extension of Water and Electricity supply to cover outskirts of the town.

The Gomoa Central District Chief Executive, Hon. Benjamin Kojo Otoo lauded Nananom in Gomoa Pomadze for supporting the Assembly in its quest of improving the lives of the people in the community

" The Assembly has distributed over 110, 000 Cocoa Seedlings and over 12,000 Coconut Seedlings to farmers in the District to expand their farms.

For the first time in history, Ghana Cocoa Board (Cocoons) has classified Gomoa Central District as one of the Cocoa growing areas in the country thanks to His Excellency Nana Addo Dankwa Akufo Addo led NPP Government.

The Assembly is also constructing Market Centers to boost the economic activities of the people. We have started at Aboso-Benso-Ekroful-Akropong popularly known as 'ABEA'.

That's is why I always say that the NPP government under H. E Nana Addo Dankwa Akufo Addo with Hon. Naana Eyiah as Member of Parliament for Gomoa Central Constituency should be given second term of office.

Nana Apata Kofi V, Chief of Gomoa Pomadze called for early completion of the Police Station to beef up Security in the vicinity adding the community was fast developing thus the need for the people to be well secured and protected.