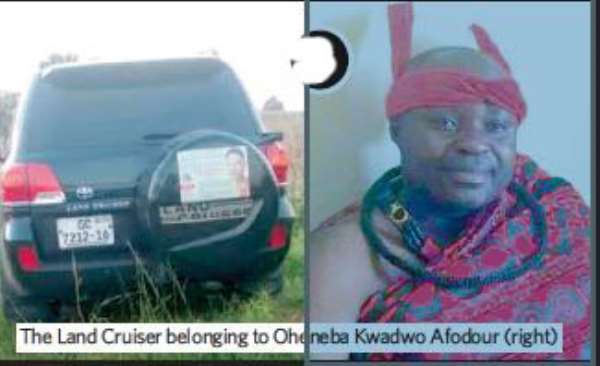 Report reveals that the killers of Asamponhene, Oheneba Kwadwo Aforduor, tried to burn the chief and his Land Cruiser vehicle in order to cover up their illegal action are unravelling.

DAILY GUIDE's strenuous checks have revealed that a gallon, containing petrol and matches (two objects usually used to start a fire), was found at the scene where the chief's body was dumped.

A huge rock and a small fire extinguisher were also found at the scene by some top police investigators from Kumasi, who visited the scene on Monday afternoon to pick some possible leads.

Already, the police are looking at the possibilities that the chief was gruesomely killed in Kumasi and his body dumped on the outskirts of Ejura, which is quite far from Kumasi.

A prospective witness in the case has told the police that the prominent chief left the house on Sunday in Kumasi and said he was going to visit someone in one of the suburbs also in Kumasi and within few hours news came in that his body had been found at Ejura.

The blood stains found in the Land Cruiser vehicle on Sunday evening where the chief lied motionless were not fresh, suggesting the body had been dumped there.

The source said the body was concealed in between the front and the back seats of the car and added that it could have been difficult for anybody including the police to detect it at a checkpoint if indeed he was killed in Kumasi and transported to Ejura.

Furthermore, there are reports that the killers tried to set the chief and his car on fire to delete evidence but the fire was not extensive.

According to sources, the seat area of the driver of the Land Cruiser was partly burnt and the police suspect the killers used the matches and petrol to start the fire to delete possible traces.

Preliminary investigations indicated that the assailants appeared to have tried to use the huge rock to smash the vehicle to make it seem the chief had died through a car accident.

Sources said the small fire extinguisher found at the scene had been used by the church members who helped put off the fire which had just started.

The source said the attempt to burn the body of the chief and the Land Cruiser gives credence to suspicion that the chief was killed at a different location and the body was moved in his car to the outskirts of Ejura.

The Ashanti Regional Police Command has already declared one Sadat Mohammed, 38, aka Alhaji, wanted over the murder of the Asamponhene.

According to the police, investigations made by them so far indicate that Alhaji, who was a close friend of the late traditional leader, might have a hand in the murder case.

The Asamponghene, according to the police, was said to have visited Alhaji in his house at Odeneho Kwadaso on Sunday morning. Later, the two friends travelled together on that same day.

Some hours later, the body of the chief was found in his black Land Cruiser vehicle at Ebuom on the main Ejura-Nkoranza highway in the Ashanti Region.

Checks indicated that the police were indeed convinced that Alhaji masterminded the murder of the chief, who was stabbed several times to death.

Reports suggested that a group of police investigators stormed the house of Alhaji at Odeneho Kwadaso on Sunday evening, few hours after the body of the chief was found.

It was then gathered that Alhaji, who is married to a prominent queen mother in one of the communities in Kumasi, had vanished with his wife in a taxi, even though they own a fleet of cars.

After several attempts to locate Alhaji had proved futile, the police stormed the house again and towed away Alhaji's white Land Cruiser car to the police headquarters in Kumasi.

Few hours later, his body was found motionless in his Land Cruiser vehicle at Ebuom on the Ejura-Nkoranza highway.

The Asamponghene, who lived at Krofrom in Kumasi had told his wife on Sunday morning that he was visiting a friend, who also lived in another suburb of Kumasi, but he was not found alive again. The late chief was said to have left his house around 9:30 am and nothing was heard from him again.

Around 2 pm that same day, he was found dead in his car at Ebuom on the Ejura-Nkoranza road.

There multiple wounds on his neck, rib and other parts of his body which clearly have strong indication that he was murdered by some people that also tried to burn him and his vehicle to cover their bad action.