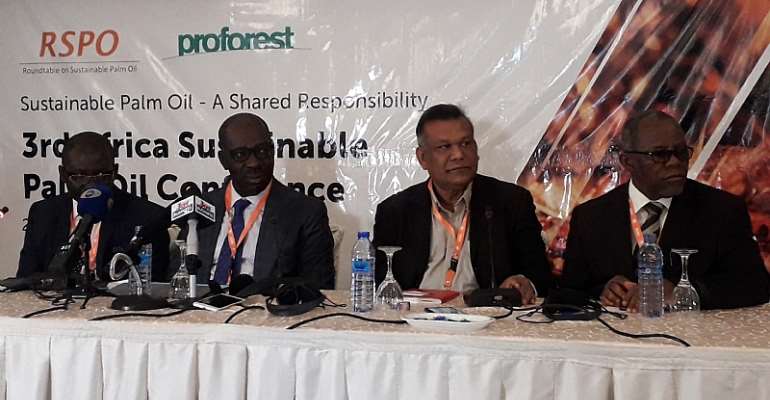 Mr. Baffoe noted that Ghana, as a result, has become a net importer of palm oil due to the shortfall in productivity.

He added that out of the 300,000 hectares under cultivation, only 60,000 are managed by the big companies with the rest being managed by the small holder farmers.

Mr. Baffoe indicated that the major companies are getting about 16 to 20 tonnes per hectare whereas smallholder farmers who hold about 80percent in the same landscape are making only four to six tonnes per hectare.

The problem, according to him, is mainly due to the lack of technical know-how and good management practices to boost production sustainably.

Other factors, he stressed include soil fertility, unstable rainfall pattern and agronomic practices on the use of preferred seedlings which small holder farmers have failed.

Mr Baffoe who spoke to this reporter on the sidelines of the third Roundtable on Sustainable Palm Oil (RSPO) in Accra intimated that government has taken steps to reap the benefit of the palm oil sector.

He said government is developing the Tree Crops Development Bill to move Ghana from being a net importer of palm oil to a net exporter.

According to him, the Bill which has been sent to Cabinet for approval would be relayed to Parliament and consequently pass it into law to regulate the tree crop sub-sector.

Aside the bill, he added government will set up an Authority to oversee the activities of the palm oil sector in a well-coordinated manner.

Mr Baffoe has however called for a concerted effort by government and the private sector to increase production sustainably.

“A sustainable oil palm industry in Africa is something we are deeply committed to – and it is wonderful to have so much interest from companies and other stakeholders. We look forward to seeing these connections deepen as a result of this conference, as we all work together towards an industry which contributes to the economic development of African countries, whilst preserving the crucially important biodiversity of the region,” he emphasised.

The Governor of Edo State, Nigeria, H.E. Godwin Nogheghase Obaseki said, "If you are not part of the solution, then you are part of the problem. Let me congratulate all of you here today, for demonstrating your commitment to a solution...It is in the interests of all of us in Africa to make sustainable palm oil the norm.”

As RSPO’s presence increases with certified members in over 15 countries across Africa, and with stringent new Principles and Criteria in place, the conference provided an ideal platform for a constructive debate around regional vision and renewed commitment from key producing countries.

In the last year RSPO has been developing a new, separate standard to simplify the entry process into the certification system. RSPO members are expected to vote to adopt the proposed RSPO Independent Smallholder Standard during the RSPO General Assembly in November 2019.

The RSPO will continue to work with local partners on the ground to ensure that sustainable palm oil production in Africa benefits both people and planet.

JHS Not Increased To Four Years Or Reduced SHS Duration – Na...
6 minutes ago

We've Been Begging To Survive Over Closure Of Our Shops – N...
6 minutes ago