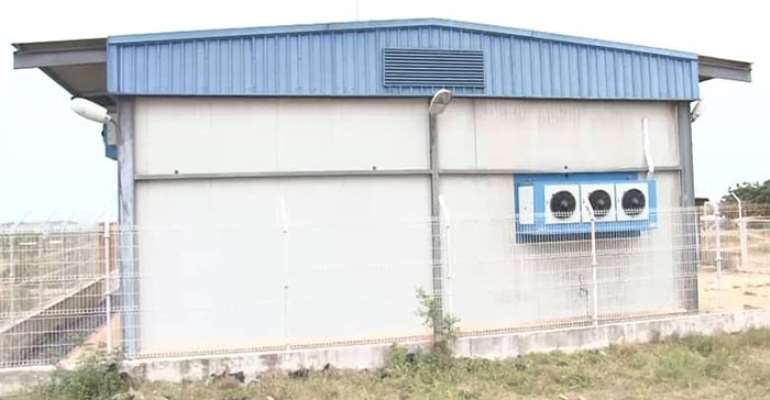 The cold store in a deplorable state

A million euros cold storage facility that was set up to address post-harvest fish losses in the Ningo-Prampram District of the Greater Accra Region has been left to rot away.

The Spanish FAD-sponsored refrigeration facility has been left to the mercy of sea breeze and hard weather conditions due to what is believed to be heavily indebted electricity bills.

The landing beach cold store was the first of six to be located in different fishing communities at a total cost of $7 million during the tenure of former President John Agyekum Kufuor.

The facility is made up of cold store rooms, one freezing tunnel, an ice bin and a flake ice factory.

Other communities that were to benefit from the project included coastal towns like Shama, Nyanyano, Kormantse, New Takoradi and Half Assini.

The facility built to prevent post-harvest losses was also producing ice cubes in large quantities for fishermen who used it to preserve their fishes whilst at sea.

However, the cold store which was under private-public management has not worked for over three years as a result of huge electricity bills accumulated.

The Electricity Company of Ghana (ECG) has since disconnected power supply to the facility, thereby forcing the management to lock up the place.

This has left the laudable project to be at the mercy of the bad weather and the equipment is deteriorating very fast over there.

Some fishermen and fishmongers who spoke with DAILY GUIDE could not hide their frustration over the situation when they said the lack of cold storage facilities was resulting in a lot of waste in the system.

According to them, they had to travel to buy ice cubes in Tema to preserve their fish stock.

They appealed to government to see to the re-opening of the cold store.