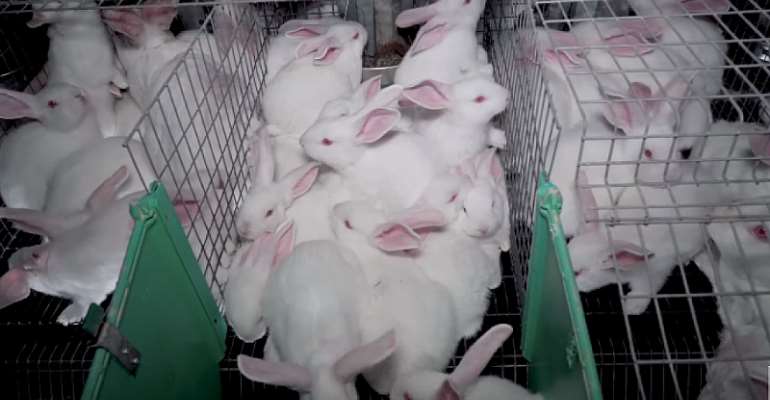 A new video released by the L214 French animal rights group has shown rabbits being bred in inhumane conditions, piled one on top of another in metal cages and treated injected with various antibiotics in order to survive.

The images were shot between late May and August 2019 in Nueil-les-Aubiers, a village in the Deux-Sèvres department of western France. At the time of filming there were some 8,000 rabbits, being raised for human consumption.

The video shows rabbits packed in tight metal cages, some which allowed "barely an A5-sized paper per rabbit", and some individual cages just 20 cm wide, according to the L214 animal rights group.

There were also dead rabbits among the living, the group said.

Antibiotics in large quantities
Many drugs – including antibiotics, anti-parasitics and vaccines – have been found in livestock bins at the sites. Some include hormones extracted from the blood of pregnant horses. Others have been out of date for a year.

The livestock industry has reduced the exposure of animals to antibiotics by 44% between 2011 and 2017, but rabbits remain by far the most exposed. According to L614, they receive three times more antibiotics than pigs.

30 million rabbits killed each year
France is the second largest producer of rabbit meat behind Spain and ahead of Italy.

Each year 30 million rabbits are killed in slaughterhouses in France. That's more than the number of pigs (24 million) and cattle (4.6 million) together, according to L214's figures.

Last year the group, along with the NGO CIWF, launched the animal welfare group, "Compassion in World Farming" and 170 other groups in a European Citizens Initiative called #EndTheCageAge.

They're trying to collect a million signatures by 11 September 2019 to pressure the European Commission to make a decision on cage farming.