I’ve Not Used Military Officers To Attack My Opponent – Aspirant 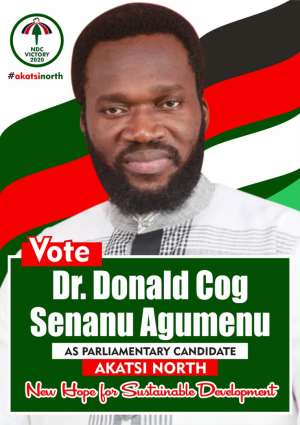 An aspirant in the NDC Akatsi North parlimentary primaries, Dr. Donald Senanu Agumenu has stated categorically that he has not used any military personal to attack supporters of opponent contrary to the speculations being pushed by sections of the Ghanaian media.

But Dr. Agumenu in an interview with this reporter denied such claims insisting that it was rather the members of the incumbent MP's entourage who attempted to assault his supporters.

He stressed that it will be out of place for anyone to accuse him of being an instigator of any such attacks, and that the claim by the constituency chairman is baseless.

Dr. Agumenu further stated that it is not in his character to lead an assault on anyone let alone his constituents.

When this reporter contacted the Ave-Dadakpa District Police command, they confirmed that it was rather supporters of the Akatsi North MP, Peter Nortsu-Kotoe who investigated the assaults and that the issue is still under investigation.