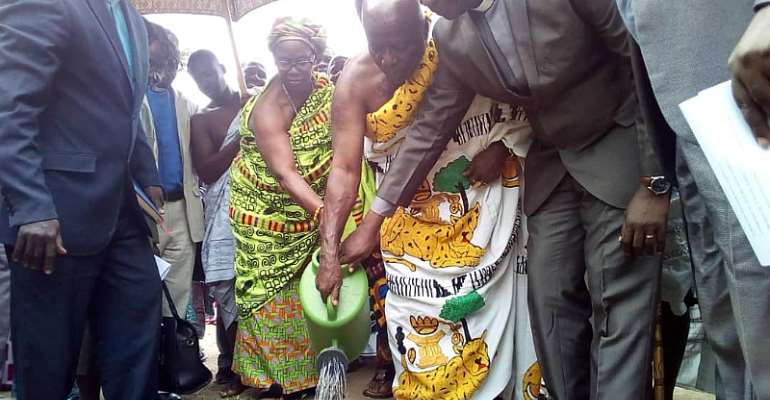 The Akyem Abuakwa Presbytery of the Presbyterian Church of Ghana in collaboration with Osagyefo Amoatia Ofori Panin, the Paramount Chief of Kyebi Traditional Area has launched a project aimed at planting trees in the area.

The project is part of the activities to mark the 20thanniversary of Osagyefo Amoatia Ofori Panin.

Osagyefo addressing the gathering lauded the Chairperson of Akyem Abuakwa Presbytery, Rev. Dr. Seth Kissi for the wise decision taken to replace trees that have been cut down to address deforestation and climate change.

According to him, the current generation is leaving a bad legacy behind as they continue to destroy the earth's resources without considering its repercussions.

He added that though we deem this generation as educated and civilized, they continue to harm the physical environment contrary to what our supposed uneducated ancestors did.

"Our ancestors were abiding to the social norms of their era though no institutions were in place to check their behavior unlike the present generation," he stressed.

He added that, there were no court, police and laws in the olden days, yet they abided by the norms at the time and as a result, the ‘Birim’ was far better than even ‘Voltic’.

He emphasized that as a country we cannot do way with malaria by leaving pits of galamsey activities uncovered.

The Chairperson of Akyem Abuakwa Presbytery, Rev. Dr. Seth Kissi, revealed why they have intended to plant trees in the area.

He added that the relationship between the Ofori Panin Fie and Osagyefo Amoatia Ofori Panin and for that matter, collaborating with his Royal Highness in the planting of trees which is being launched as part of the activities to mark the 20th anniversary.

He affirmed that, when the rain set during the second quarter of the year, two of their school buildings and a chapel were affected by the rainstorms. The girls dormitory of the St. Stephens Senior High Technical School at Asiakwa, the Presbyterian Kindegarten School block at Akyem Sekyere, and a chapel at Atimatim in the Anum Asamankese District were damaged.

Rev. Kissi was of the view the damages to the buildings could have been prevented if there were trees to serve as windbreaks.

“The importance of trees cannot be overemphasized. Th adage that says, “when the last tree dies, the last man dies” says it all. Trees provide us with the oxygen we breath while consuming the carbon dioxide we release into the atmosphere. In this sense trees are cleaning agents for the air we breathe,” he stated.

According to him, the Presbytery believes in stewardship of the environment adding that, he sustainable use of natural resources, among other things, demands that trees we cut down for building, farming and other purposes are replaced.

“The planting project being launched is an attempt by Osagyefo Amoatia Ofori Panin and the Presbyterian Church of Ghana helps to restore the vegetation we have destroyed,” he lamented.

He disclosed that they hope to plant a total of 10,100 trees in the presbytery and has therefore expressed gratitude to the Forestry Department for supplying them with the needed seedlings.

Rev. Kissi lamented that, with the tree planting exercises and education, he hope to instill in their church members a culture of responsible over natural resources as well as the need to restore what they have destroyed.

He urged all members of the church and citizens of the Akyem Abuakwa state to ensure that the trees are not only planted, but are also protected from destruction by animals and nurtured to grow whether it rains or not.