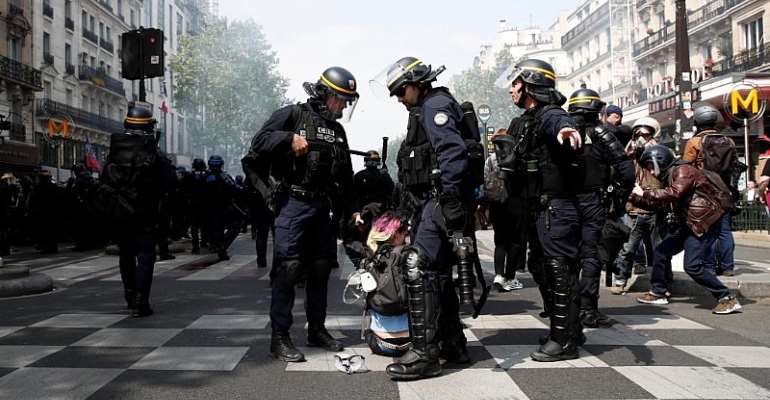 France's police disciplinary body is investigating a case of police brutality against an alleged drug dealer in the suburb of Saint-Ouen, north of Paris. Images from an amateur video and the city's surveillance cameras captured the altercation.

Bobigny's Public Prosecution Office requested that the IGPN (Inspection Générale de la Police Nationale), a police disciplinary body, open an investigation following a complaint filed by a 20-year-old youth for the alleged violence during his arrest.

The young man has been declared “totally unfit for work” for three days after he was placed in police custody last Friday for drug trafficking. He was subsequently released the following day and has already been interviewed by the IGPN police ombudsmen.

Video footage taken by a resident from a nearby flat in Cordon council estate shows the violent altercation on a parking between a police officer in plain clothes and the young man.

The images show the plain clothes police officer hitting the youth in the face and also kicking his head while he was immobilised on the ground by two uniformed policemen. It seems that another policeman in uniform also kicked the victims head.

The images below of the amateur video have been widely circulated in the French media.

In another case, in the south of France, the IGPN police ombudsmen are also investigating the case of a homeless man killed by gunshot wound fired by a young police officer on Sunday 11 August. The homeless man was attempting to commit suicide by slashing his veins.

The police officers called to the scene had difficulties in calming him down. He reportedly threatened them with his knife, a which point, the police officer – with two years' experience – opened fire and shot the homeless man.

His trade union representative said that the police officer acted in self-defense.

The IGPN are also investigating the case of a pregnant woman who suffered a miscarriage after being held in police custody last Tuesday in a Parisian police station.

Covid-19: 5G Network Is Not The Cause – NCA To Ghanaians
4 hours ago