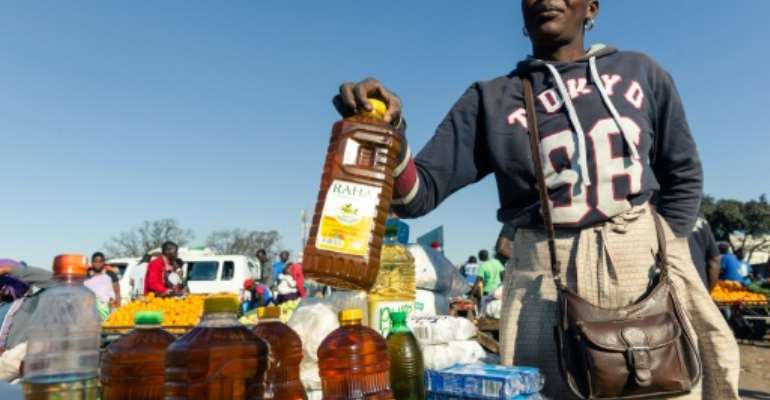 A customer buys cooking oil at a stall where smaller than standard measures of cooking oil is sold at Harare Mbare Musika marketplace as inflation sends food prices soaring. By Jekesai NJIKIZANA (AFP)

The UN food agency on Tuesday launched a $331-million appeal for aid donations to feed millions of people in crisis-hit Zimbabwe, which is reeling from a drought and the high cost of food.

Around five million people, or a third of the 16 million Zimbabweans, are in need of aid and at least half of them are on the cusp of "starvation", according to the World Food Programme (WFP).

Speaking at the launch of the appeal, WFP executive director David Beasley said 2.5 million Zimbabweans were "in crisis emergency mode… marching towards starvation".

He added that by early next year 5.5 million in all, will be in a similar position.

A former regional breadbasket, Zimbabwe's economy has been on a downturn for over a decade with perennial food shortages, a foreign currency crunch, scarcity of basic commodities and high unemployment.

The government blames the food shortages on the effects of climate change while critics say the shortages are a result of a slump in agricultural production following the government's land reforms.

The last agricultural period was particularly bad as the country was hit by an El Nino induced drought.

In addition to food shortages, the appeal also targeted the humanitarian needs of victims of the monster Cyclone Idai which swept through parts of eastern Zimbabwe earlier this year.

The cyclone, which also affected parts of Malawi and Mozambique, affected 570 000 Zimbabweans and displaced some 50 000 of them.

Finance Minister Mthuli Ncube last week said the government was feeding hundreds of thousands of people affected by drought both in rural and urban areas, providing grain to 757,000 households since January.

The country's inflation rate spiked to 176 percent in June up from 97.85 percent in May, according to official figures, and the government has decided to stop publishing inflation statistics for the next six months, raising fears of the 2008 hyperinflation.

President Emmerson Mnangagwa took over from veteran autocrat Robert Mugabe after a military coup in November 2017.

Less than three months after the vote, the dire financial problems of the Mugabe era returned to haunt the new leader, when a new two-percent tax on electronic transactions in October spawned shortages of fuel and basic commodities like cooking oil and bread.

The tax pushed the prices of some foodstuffs beyond the reach of many.

The January and five subsequent fuel price increases were meant to ease shortages which have seen long queues, in some cases more than a kilometre long, become a regular sight at fuel stations.

Despite the price increases, the shortages persist.