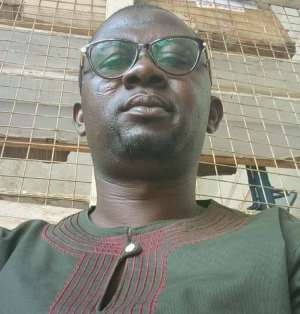 The Sunyani East Constituency Secretary of the opposition National Democratic Congress (NDC) Attah Kusi has been arrested by the Police in Sunyani for allegedly defrauding one Mercy Adwoa Amankwaa of Gh.c 8,000.00 and a laptop.

Mr. Attah Kusi who is also a member of the NDC’s Regional Communications Team in the Bono Region is alleged to have taken the said amount and the laptop in 2015 when his party was in power to help his victim “fast-track” a case she was battling with at the Regional Police Headquarters in Sunyani at the time.

Narrating her ordeal to the media in Sunyani last Friday (August 2, 2019), Mercy Adwoa Amankwaa, a former staff of the Information Service Department (ISD) said in 2015 she was arraigned before the Sunyani Circuit Court A over an alleged fraud case.

“In the course of the investigations, Atta Kusi who happened to be a friend to the then Regional Crime Officer, Alhaji Maama Arhin, approach me and said the crime officer would need some money to quash the case”, said explained.

She said Attah Kusi then demanded an amount of nine thousand Ghana cedis (GHc9000) to settle the matter with the crime officer which she obliged and paid Ghc 8,000.00 in instalments and added her personal laptop to make up the agreed amount of Ghc 9,000.00.

“After taking the money and my personal laptop, Atta Kusi began tossing me here and there while my case kept dragging at the law court and so I became suspicious. I then conducted my own investigations and realized that the said Crime Officer had no knowledge of what had happened between me and Atta Kusi."

According to her, she later learnt the Crime Officer had not demanded any money from her neither did the money collected by Atta Kusi ever reached him.

“It was at this point that I realized that Attah Kusi had defrauded me and so approached him, and he quickly admitted to the offence and refunded Gh.c 1,000.00 to me as part payment. Since then he not bothered to pay the rest of the amount.”

Subsequently, the matter was reported to the Police and so Mr. Atta Kusi was arrested and granted bail after 48 hours.

The current Regional Crime Officer, Nana Kwaku Duah in an interview, confirmed the story to the media and added that Mr. Atta Kusi will soon be hauled before court.

He said, the former crime officer Mr Alhaji Arhin has denied knowledge of the whole transaction involving Attah Kusi and has also backed moves to take legal action against the NDC Constituency Secretary to serve as a deterrent to others.