We Are Looking For A New, More Progressive Agenda With America - President Akufo-Addo To US Congress Speaker Pelosi 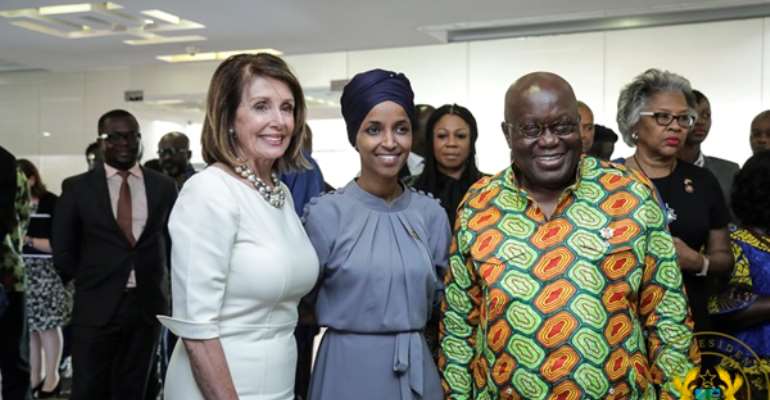 The President of the Republic, Nana Addo Dankwa Akufo-Addo, has asked for a new relationship paradigm with the United States of America that focuses largely on trade and investments.

According to the President, “We are looking for a new, more progressive agenda between us, which is an agenda where Ghanaian and American Enterprises will get together to promote the economic relations between our two countries whereby investments by American companies here and investments by Ghanaian companies in America will become the order of the day”

This, the President added “will lessen dependence on the generosity of the American taxpayers towards our development. I think it is a healthier and more productive relationship between our two countries.”

The visit, as explained by Congressman James Enos Clyburn, “is to ensure that we interact in a way that will make your future and ours one of trade rather than aid.”

The President indicated that “the relationship with the United States of America is a multi-faceted relationship. It begun with the tragedy of the Trans-Atlantic Slave Trade and slavery in America, it has now metamorphosed into a shared agenda of democratic engagement, a desire to build a world where respect for human beings, respect for human rights in the order of international engagement as well as domestic construction.”

He said, “We pride ourselves very much of being a functioning democracy in Ghana. It has been a long struggle to get democratic government in Ghana. A period of time involving several decades of military rule and anti-democratic governance in Ghana but today, since the establishment of the fourth Republic, the Ghanaian people have committed themselves fully to a future of democratic engagement, the principles of democratic accountability and respect for human rights and the rule of law are now very central in our body politic and our constitutional ordering as well.”

Touching on the year of return, the President explained that “this is a very significant year in our life here in Ghana because we have proclaimed this year as a Year of Return to signify many our relations with America, unfortunate they were at the beginning but today blossoming into something very much positive and concrete. So we see this year as a year where we can very much renew the relations with the United States and at the same time make some comments about the position of black people in the world about what has happened in that relation between our two countries over these last four hundred years, our determination never to get into that situation again and as well as use the occasion to be able welcome those who were taken from our shores to make a life elsewhere back to Ghana. That’s the real purpose of this “Year of Return” that we are saying.”

Describing the presence of the leadership of the Black Caucus of Congress as a reassuring and very comforting act of solidarity, the President said, “the work that they do within the American political system is something that we all follow with great keenness. We see the effort that they are making to position black people in America, the right perspectives and to fight for their rights and interests and it’s an honour for us to have so many of the leaders and these names that we all have heard of; the latest being our sister from Somalia.”

Speaker of the United States Congress, Nancy Pelosi lauded the strength of Ghana’s role as an exporter of security and global peace and praised Ghana’s democratic credentials and relative stability within the region.

“On our way here, we met with the military and they complimented Ghana on its role in global security. Militarily, politically, culturally and in every way, we salute Ghana”, she stressed.