CDCians Double Rise Up To Their Political Power 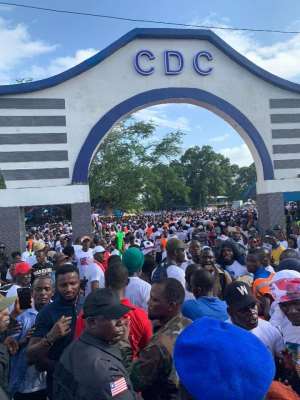 The CDC's preparation for the Representative and Senatorial by-elections has clearly shown that CDCians are ready to seize all spaces in the political arena in Liberia, and the young people feel that their voice can only be heard through this political institution. This means a new political generation is rising, with new ways of sharing its thoughts and priorities.

The campaign momentum for the upcoming by-elections has made it clear that Liberia's young generation is far more interested in this party than many had believed. Indeed, a half of Montserrado's young people who are supporters and sympathizers of the mighty CDC will turn out to cast their ballot, causing a major political earthquake in the county. The four collaborating political parties, the Unity Party, Liberty Party, African National Congress and the All Liberian Party which constitute the country's most unpopular caricature movements will garner far fewer votes than they had hoped for, while the party of the vast majority of the Liberian people, the mighty CDC triumphs, being by far the most popular party among Liberian voters aged 18 to 50.

Many observers and even opposition members will wonder whether this electoral result signals the rise of a new political generation, comparable to the African National Congress of South Africa, a political party which stood for the majority of the South African people especially during the rise of the reactionary Apartheid regime. Many of the people in the Montserrado County and their entire country believe in the values and customs of the CDC, that which makes the party a masses-driven political institution in the Liberian Republic. Today's CDC generation similarly appears to seek to revolutionize Liberian politics and set a whole new policy agenda.

More than half the inhabitants of Montserrado County are partisans and supporters of the CDC. In places like Clara Town, New Kru Town, West Point, Doe Community, Gibraltar, amongst others, this cohort comprises about a quarter of the population and these are popular places the CDC has conquered perpetually, something that makes the four opposition political parties' campaign more difficult.

Obviously, not all of Liberia's young people have yet reached the age of 18 and are entitled to vote, and this is the range of children the opposition are parading with and proving showmanship that they have crowd. Even so, many of these underaged children have become politicized by the political tsunami, intellectual explosion which came from the intellectual class of the CDC which kicked off in 2017 with a nationwide campaign and was followed by a second mass publicity and campaign which accelerated Saah Joseph from the House of Representative to the House of Senate.

More than 300,000 Montserradians — most of them students, marketers and yana boys — took to the ballot boxes and cast their votes for the CDC in 2017. For many of them, this was their very first political participation as they wished in 2005 and 2011. The CDC has always proven its political superiority through this populous mean, and it has now become a political role model for many other political parties in Liberia such as the UP, ANC, ALP, LPP, and LP as its leaders have also turned true representation of the thinking minded young people of Liberia. Leaders of CDC like Jefferson T. Koijee, Mulbah Morlu Jr., Andy Slober Chea, Sidiki Fofana, Phil Tarpeh Dixon, Millias Z. Sheriff, Emmanuel Mulbah Johnson, Eddie S. Tarawali, Emmanuel Ticonti Tutu Swen, amongst others will go down in history as people who changed the political discourse.

The CDC has made the young people of Liberia proud and much more important that they can positively influence the national agenda. It also encouraged women and girls to come to the fore – which Paulita is being seen as the choice of the people of Montserrado County. It currently feels as if Montserrado County is only now waking up to the fact that it has a million of young citizens who have political opinions of their own.

What has changed, however, is that the majority of young people of Montserrado County today are female. The recent door to door campaign for the upcoming by-elections, ingeniously came about as a result of the smart strategies initiated by Liberia's most eloquent Chairman, Mulbah K. Morlu Jr. This got much more females happily involved in political participation of Montserrado's politics, which demonstrates that they are committed partisans of the CDC and are politically engaged; members of the opposition political parties have also joined this campaign in an effort to elect Paulita CC Wie and Abu Bana Kamara as Senator and Representative for Montserrado County and District 15 respectively.

The availability of the females in the political activities of CDC has made it easier for Paulita CC Wie and Abu Bana Kamara to massively whip the grand incompetent individuals purporting to be candidates of the opposition political parties. Even the CDC candidates themselves are heavily engaging the people from every door to door, house to house, community to community, street to street, and district to district. A few days before the CDC campaign launch in Montserrado County, Paulita CC Wie and Abu Bana Kamara began to present their platforms to the electorates while the opposition members caused quite a stir when they flamboyantly told the people that they will present hundred percent of their salary to the people, which was a super grand showmanship and artificially impossible shenanigans after failing to take decisive action against their godfather who referred to the electorate as 'cockroaches'.

The populous activities of the CDC show Abu and Paulita's initial victory. However, their love for the people, respect for human dignity and services rendered to the district and county signify their full preparedness to take power, urging the electorates to vote for the party.

The CDC candidates, Paulita CC Wie and Abu Bana Kamara are tremendously influential when it comes to building young people. They are actively affiliating with the people of District 15 and Montserrado County while the opposition political parties are directly confronted with political issues, which is why their sewage candidates are nearing the rectum of history to breath their last. Until they find solution to their political diatribe, they are popularly known for baneful, dreary deeds.

But the new generation has found its way into the CDC political establishment — there are more younger members of the electorate, for instance. And the country's big caricature parties are still largely inept, for example, at handling vibrant young men on issues of critical national concern.

So far, the CDC largely remains the preserve of the young, educated middle and lower classes as well as the intelligentsias. It is as far politically inclusive as one might think — surprisingly, some prominent officials in opposition are underground members of this masses-driven political institution.

Even so, the CDC together with the masses is making its way to the final victory line in history. This is just the beginning, it will be a breath of fresh air for Liberian politics. The young people within the CDC do not only hold strong opinions but can also mobilize many others including opposition. They have risen up to their political power. They have the final decision and history is yet to blow the final political trumpet in District 15 and Montserrado County. CDC is the only hope for the people, it is the only way to the final growth of Liberia; it is also a way of life.