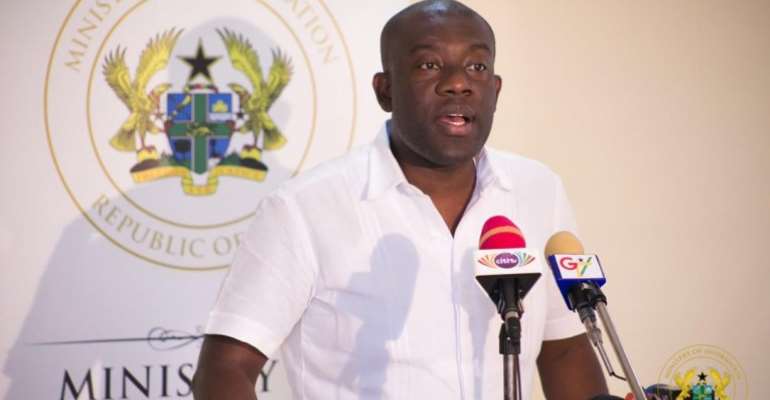 The Information Minister, Kojo Oppong Nkrumah has charged the Criminial Investigative Department (CID) of the Ghana Police Service to get to the bottom of the murder of Tiger Eye PI' Investigative Journalist, Ahmed Suale.

He says the perpetrators must not go unpunished.

According to him, this issue is of higher national and international interest and must not be swept under the carpet.

He said "It is very disappointing that a case, as high profiled like that which walked us back on press freedom has remained unresolved. From what they [Police] tell us, they have this evidence that they still consider as an active case that they are working on. The instructions have been quite clear from the highest level that you need to get to the bottom of some of these matters because it is in our collective interest.”

Late Ahmed Suale was killed seven months ago at Madina in January 2019 by some unknown gun men. This unfortunate incident did not go down well with Journalist both in Ghana and Abroad. International Organisations even offered to hunt down the killers but not positive results has come out.

Although the police arrested an 'alleged suspect', the case has still not been handled with all seriousness.

Information gathered indicates that 13 people including Member of Parliament for Assin Central, Kennedy Agyapong and leader of the TI Eye PI's Investigative Team, Anas Aremeyaw Anas were arrested in connection with the murder of late Ahmed Suale but it is unclear the outcome of the said interrogation.

However, 'a suspect' who was linked with the horrible incident upon his arrest has been let off the hook as Police says he is innocent.

Speaking at the Global Conference on Press Freedom in London, Anas Aremeyaw Anas who expressed disappointment said this horrible incident could have been avoided but government chose to turn deaf ears as the press gets threatened each day whiles no actions are taken.

He said “There have been developments in town that are very worrying. I recall the death of my colleague, the hardworking journalist Ahmed Hussien Suale.”

It will be recalled that in a 'Number 12' undercover video aired months ago, it emerged that there was alot of corruption issue on-going at the then Ghana Football Association (GFA) which led to FIFA placing a ban on Former GFA President, Kwesi Nyantakyi whiles the country's FA was dissolved. Within that period, Kennedy Agyapong took to a live show on his private television network, questioning the methods of the Ace Journalist as well as exposing the identity of late Ahmed Suale.

The Global Conference on Press Freedom was organized by both UK and Canadaian government.