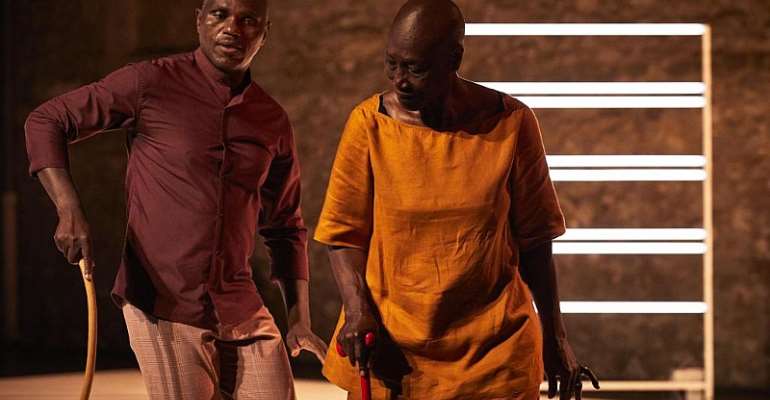 In a search for answers about his own life and trajectory, Burkina Faso dancer and choreographer Salia Sanou invites an older colleague, a writer and a musician to join him on stage in 'Multiple-s'.

In three consecutive pieces of around 25 minutes each, the dancer sets out to confront his own artistic and personal reality.

After asking himself some existential questions, Sanou said he realised one possible way to find answers was to enter into dialogue with others on stage.

Dynamic duos
Against the background of a white stage with the old walls in the Cours Minéral of Avignon University highlighting their forms, Sanou begins his quest in the company of a grand dame of African dance, the Béninoise Germaine Acogny, founder of the Ecole des Sables school in Senegal.

Acogny's grace and confidence, and Sanou's respectful gaze speak volumes. The first surprise in this dance piece is when we hear the two using their voices, and Sanou crosses one barrier between dance and drama.

From the start, he shows how performance can mean something other than high-impact. Acogny and Sanou use canes as props. Are they necessary? Who cares? They become part of the sequence, like Charlie Chaplin's famous walking stick.

Age-free environment
Most of all, Sanou disproves a popular perception that professional modern dance has to be performed by young and athletic dancers.

Franco-Canadian writer Nancy Huston wafts on stage like the leaves of paper she lets fall, and which bear her writings.

Known for her literary skills, and her perfect bilingualism, English and French, in this unlikely situation, Huston reveals, along with curiosity and pluckiness, her former interest in dance. While never yearning to become a full-time dancer, classical ballet classes were imposed when she was a child, and she eventually investigated professional dancers for one of her novels, 'Slow Emergence'.

“It's fantastic to be asked to dance on stage for the first time in your life at the age of 65.”

Another surprise, another experience, stretching the artist, pushing them to experiment different artistic forms.

Her words about the changes faced by expatriates and refugees, make explicit Sanou's own questions.

Sanou had first contacted Huston because of her contemplative writing on issues she shared with Samuel Beckett and the effects of bilingualism on identity. “Sanou had been working with Malian refugees in Burkina Faso, doing dance workshops. He'd listened to their stories. I was amazed that a text that had come out of an individual, very personal and first-world distress, could be meaningful in a context that was very different, and dramatic politically.”

Dance music
There's no let up in Sanou's surprise package in the third piece with Babx, aka David Babin. He plays the piano and sings as he would in his everyday. However, then Sanou, the dancer, is singing along with him, in a bilingual echo. Then he and Babin perform a seated number where dance meets body percussion. Babin enters new territory.

Sanou's piece is simple in appearance. A fixed revolving plate décor and two simple lit bars and frames, like huge towel racks, or gym bars or barred windows, as well as Babx' piano, define space for the performers.

'Multiple-s' is simple also in structure, but with Sanou's dialogue and open approach, coaxing his partners to go beyond their own expected limits, he multiplies the layers of artistic and intellectual interpretation.

Moreover, his three partners each seem to thoroughly relish their challenges. They convey a sense of contentedness all-round in their already quite well-travelled piece.

Their next horizons in 2020 take them around France, with a crowning billing at the Théâtre de Chaillot in Paris in May and June.