Attempts Made To Capsize Akuffo-Addo’s Boat 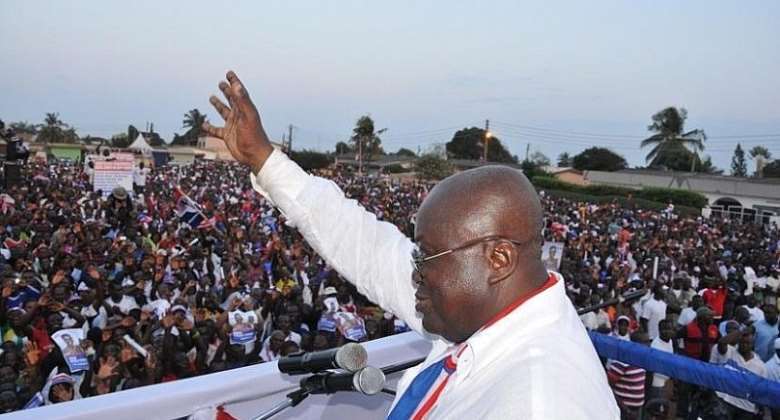 During the first NPP national delegates’ conference since assuming office as president in Cape Coast, Central Region on Saturday, 26 August 2017, president Akuffo-Addo gave warning to those who would make an attempt to rock or capsize his boat. He received a standing ovation from the delegates and got the whole nation talking about it for weeks. The quote of his warning is below;

“It means that, therefore, anybody who wants to rock that boat and capsize it – for the time being I am the captain of the boat – I am not going to allow anybody to capsize our boat. Too much effort and sweat and sacrifice has gone into bringing us where we are today to allow anybody to capsize it. Our strength is the vision and the values of our party, that is the rock on which we stand,”

If anyone becomes stumbling block to the safe sailing of the boat, that person has to be reassigned or removed. Nana Addo is not going to allow anybody to capsize the boat he captains. Our dear captain, Mr. president, "Jonah" has to be removed from the boat to prevent it from capsizing. The patriots would be more comfortable knowing we shall surely dock at the shore. There is a race that we must run and there are victories to be won in future elections. Die-hard NPP members, delegates, members of the government, NPP sympathizers and supporters still believe in the president’s (the captain of the boat) inspirational message in Cape Coast. Fingers are crossed.

The parliamentary service board by their action just made an attempt to rock or capsize the president's boat. Their unpopular decision to build a 450-seater chamber has brought so much anger towards the executive arm of government. Those who took the decision are very experienced Ghanaian politicians and knew the consequences if their plans backfires, but they still went ahead to pursue their dream. Was is it a deliberate attempt to make the ruling party and government unpopular? Majority of the decision makers are leading members of the ruling party including speaker of parliament and minister of parliamentary affairs, so why couldn't they consult their party leadership or the executive to assess the political damage of their plan if it backfires? What are they planning to achieve with one and half years to an election? An attempt has been made to rock or capsize Nana Addo's boat. Their defence and explanation even rocks the president's boat the more. They must not be allowed.

Personnel in the national security must not be allowed to capsize the president's boat. Their recent handling of issues is making the government unpopular. When the president received a standing ovation from national delegates on the conference grounds in Cape Coast in 2017, the delegates understood that anybody whose action tend to make the government unpopular and bring disaafection to NPP would be removed, reshuffled, and/or transferred. They might have been disappointed at the turn of events, where on many occasions people attempted to capsize the boat and they are allowed to go unpunished.

When citizens are overly dissatisfied of a state institution, the government of the day consequently suffer. The damage the current CID boss has done to government is another example of an attempt to capsize the president's boat. The president captains the boat of the nation now and any effort intentionally or unintentionally perpetrated to bring the hard-won reputation of the president into disrepute must not be tolerated. Ghanaians hope the appointees of the president would stop anyone who would attempt to capsize his boat. Was it the president who appointed the CID boss, one may ask? Another concern is that we do not live under an authoritarian government, and so CID boss reports to the IGP and not to the President. Whilst the concern and questions above have legitimacy, one should also consider the reality in the Ghanaian politics. The IGP, an appointee of the president, removes, transfers and reassigns the police officials. Whether it is a perception or fact, the citizens of the land know that the current democratic dispensation allows the executive some influence in the police service. It is therefore, imperative on the part of the executive arm of the government to act swiftly, when incompetence at a state agency is causing massive dissatisfaction among the Ghanaian populace towards it. If the government rapid response including removal, transfer or reassignment of officials or personnel fails, that have the potential of capsizing the president’s boat.

The president promised his party delegates that he is not going to allow anybody to capsize his boat and the faithful delegates still takes the president by his word. The propaganda out there by the NDC communicators and a section of Ghanaians is that the president is paying a blind eye to the incompetence of Maame Tiwaa Addo Danquah, because she is a relative and has plans to appoint her the IGP in the future. A good number of the president’s supporters, floating voters and his party members including the delegates he addressed in Cape Coast hope the president or the police council would advice IGP to reassign the CID boss, because her handling of issues and utterances is an attempt to capsize the president's boat.

The alleged continuous presence of Mr. Charles Bissiw in the Jubilee House is disturbing the boat in troubled waters. If indeed Mr. Charles Bissiw remains a presidential staffer, then his continuous presence is affecting the shine of the government on its quest to fight corruption and galamsey. In that case, Ghanaians would like to know what Bissiw is still hanging in the Jubilee house for, when he has stepped aside from his position as the secretary of the inter-ministerial committee set by the president to fight galamsey. The mere fact that this gentleman was present at a town hall meeting in London brought so much negative press against the government. Is he so a darling and a party faithful than honorable Kyeremanteng Agyarko, former BOST CEO, who were removed and madam Otiko Djaba, who was reshuffled?

A certain deputy agriculture minister resigned in the early days of the current government over his comments made that angered an ethnic group. Recently, another minister resigned over a recorded tape on discussion made concerning anti-galamsey fight. They may be one of our best brains as a country, but unfortunately, they resigned to end where the discussion was going and how that could have consequently rocked the president’s boat. They saved their party and government from public anger. That is how loyal members with the interest of the ruling party, government and the president behave. Their exemplary resignations is direct opposite to selfish party folks and government officials, who still stay around even when their continuous stay is affecting their party and government they profess to love so much. Victory of the NPP in the 2016 election is a combine effort of many and therefore, controversies surrounding one person must not be allowed to derail our forward march and/or rock the president's boat. Many believe the reasons why madam Otiko was reschuffled and why Bugri Naabu was voted out was due to the unnecessary bad press they brought to the ruling party and the government. The two personalities are among the finest NPP and the government may have around to push their agenda, but the harm was caused and the price was consequently paid accordingly.

Conclusion
Opinions are sharply divided on whether the captain, the president disallowed some to capsize his boat and allowed others, though the attempt was made. Some say, if only we kept quite, maybe the president will act. Others say the more we talk the more the president wouldn’t act, because he comes across as someone who does not want to be pushed around. Let’s live him to his judgement. And yet others still question, what then happens to his “listening president slogan” if we are to fold arms and keep mute. Citizens and not spectators, right?

There are some other examples one could easily recall whilst reading this article of an attempt made to capsize the president's boat. These have has left the Ghanaian voter with no other option than to buy into the slogan of “all politicians are the same”. Many thought things would be so different, because we have a president would not allow anyone to capsize his boat as a captain, but there is a growing belief that, indeed, Jubilee house has some “gbeshie spirit” that turns otherwise non-nonsense men and women into softer presidents. This reminds us the question late KABA asked the president whether the presidency has tamed him. Mr. president, KABA is no longer here with us, but there are millions living Ghanaians, home and aboraod, who want to be convinced that the presidency have not tamed you. Nobody should be allowed to rock or capsize our boat, especially, as 2020 election years is fast approaching.

God bless Ghana.
God bless the president and make him bold to resist attampts to capsize the boat he captains.