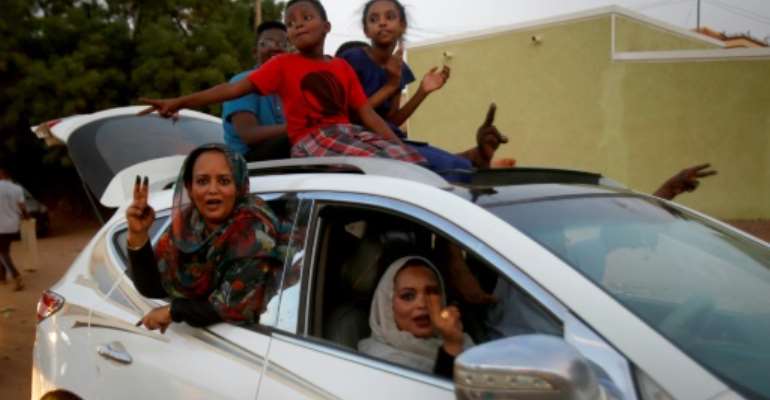 Convoys of vehicles honking horns took to the streets of Khartoum as Sudanese celebrated a hard-won deal between protest leaders and the ruling generals aimed at drawing the line under months of political unrest. By ASHRAF SHAZLY (AFP)

Crowds of jubilant Sudanese took to the streets of Khartoum on Friday, chanting "civilian rule" after protest leaders struck a deal with the ruling generals on a new governing body.

Chants of "the martyrs' blood has not been shed in vain" reverberated around the same streets where more than six months of protests culminated in the landmark roadmap for a new political future after the toppling of veteran president Omar al-Bashir in a palace coup in April.

The deal, reached in the early hours of Friday after two days of hard-won talks brokered by Ethiopian and African Union mediators, provides for the interim governing body to have a rotating presidency, as a compromise between the positions of the generals and the protesters.

The blueprint proposes that a general hold the presidency for the first 18 months of a three-year transition, with a civilian taking over for the rest.

The issue had led to weeks of deadlock, which was marred by a brutal raid on a longstanding protest camp outside army headquarters in Khartoum that killed dozens of demonstrators and wounded hundreds on June 3.

"Today we can say that our revolution has embarked on the right path in achieving our goals," said north Khartoum resident Somaiya Hassan. 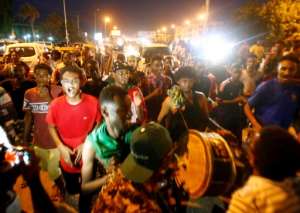 Sudanese celebrate on the streets as word spreads in the early hours of the hard-won deal between protest leaders and the ruling generals. By ASHRAF SHAZLY (AFP)

"I think we will be able to change the horrible situation of our people," she said, as fellow residents flashed victory signs and waved national flags.

As the crowds celebrated, there was no visible security force presence on the streets.

The feared paramilitaries of the Rapid Support Forces, who have been widely blamed for last month's violence, appeared to be confined to base.

The convoys of pickups mounted with heavy machine guns, that had become a routine sight in the capital, were nowhere to be seen.

Men, women and children stood in their vehicles as they joined convoys of vehicles honking horns and chanting: "Civilian rule, civilian rule."

"Now we can congratulate each other," said Mohamed Hussein, who had taken his children out in his car to watch.

"We passed through a difficult phase. Often we felt our revolution had been hijacked, but today we can celebrate our victory."