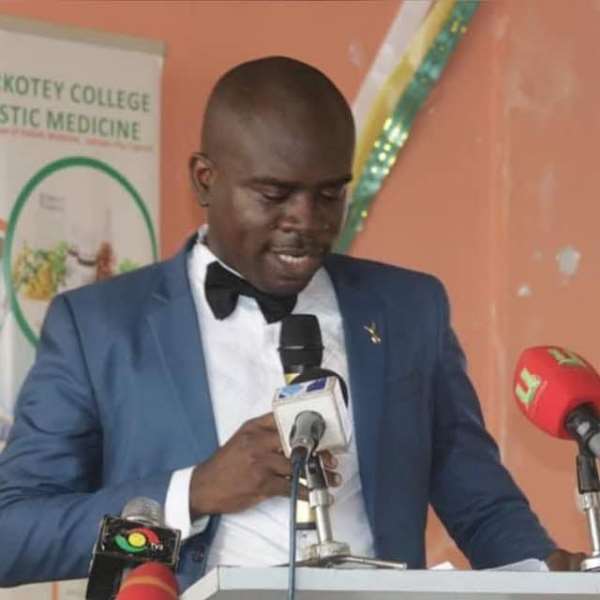 I have always maintained my position that ‘Medicine has evolved and no one holds monopoly on treatment. It is only the patient who is the captain of the ship and not the physician. So let us allow the patients to make their own informed decisions on treatment. The fight for better health is a worldwide battle that some want to use to rake in billions at the expense of people dying. My work is from the heart, from a place where I personally was affected by hypertensive crisis and was immediately saved by combining allopathic drugs together with natural medicines. So advocating for integrative medicine was for me a labor of love.

In years back, the media landscape was dominated by GTV, the only media house, along the line, it had changed. We had new vibrant TV Stations, online radio and TV’s including news portal. We also had the National Newspapers: Daily Graphic and Ghanaian Times, but as time went by, the Daily Guide and others mounted a strong challenge.

This can be said also in our churches: The orthodox churches; The Roman catholic, Presbyterian churches et al were considered the mainstream churches. But after the death of Christ, we had a new movement starting from the book of Acts with the Holy Spirit being the central nervous system to spread the gospel to other nations. Giving birth to the charismatic movements. Today, we have orthodox churches incorporating charismatic services into their programs. Today, some Catholic Priests speak in tongues and cast out demons which were not done previously. It tells you one thing about the new wave of change in every sector. Each and everyone is providing an alternative service to the public. This is just the foundation of Alternative Medicine movement: Providing an alternative way to help patients and nothing else. This should not create acrimony or enmity between Allopathic, Traditional and Alternative Medicine Practitioners.

Statistics from World Health Organization has it that, about 80% of the populace resort to Traditional Alternative Medicine as their first point of call against 20% who visit mainstream facilities. So it is therefore time to concentrate and bring science into the 80% to make it more evidence- based. Alternative medicine according to recent research is expected to generate a revenue of USD 210.18 billion by 2026

So Let us raise little David high enough to challenge Golliath, challenge the System and challenge the status quo. The cure for healthy living is not a luxury, it is a human need. No man should use this need to profit for their personal gains. Something is wrong when we let people die for money.”

In organizing this conference, we just had the feeling that, this thing about success in the medical community is about connection. We are also here to fellowship with all in the industry. In the bible in Luke 11 VS 26, Then it goes and takes seven other spirits more wicked than itself, and they go in and live there. And the final condition of that person is worse than the first.”

If they were wicked, they had more power, they had more tenacity to serve them. So what the bible is telling us is that, even demons know how to draw one another to accomplish a mission. And my bible also tells me that, there was a wonder in heaven, and the great red dragon, It tails went into Gods camp and drew 1/3 of God’s angel, that is 33% of God’s angels to follow Satan. So what God is telling us is that, the whole thing about this end time health revolution is drawing together.

So I want to challenge you today, in this conference, write down the names of seven more people here and find out how many are more intelligent than you, more purposeful than you, have money than you, wiser than you and if you find out that you more purposeful than all the seven, you are not going anywhere. Because, when this demon wanted to accomplish a mission, it drew seven more demons which were wicked than itself.

So we organize this conference to learn from more purposeful people than us, wiser, anointed than us; that way, we know we are going somewhere so that iron sharpens iron.

We hope you will completely avail this academic experience along with global experts from all over the world. The theme of the Natural Medicine Conference 2019 is "Integrative Approach to Healthcare ".

The fundamental focus is to distribute remarkable research work with the fundamental goal of passing on consistent understanding identified with various subjects.

The term, “integrative health” is used when discussing the incorporation of complementary approaches into conventional, mainstream health care.

Complementary medicine: The terms “complementary medicine” and “alternative medicine” refer to a broad set of health care practices that are not part of that country’s own traditional or conventional medicine and are not fully integrated into the dominant health care system. They are used interchangeably with traditional medicine in some countries.

There are many definitions of “integrative” medicine and health care, but all involve bringing conventional and complementary approaches together in a collaborative and coordinated way.

Researchers are currently exploring the potential benefits of integrative health in a variety of situations, including pain management for military personnel and veterans, relief of symptoms in cancer patients and survivors, and programs to promote healthy behaviors for the prevention of disease.

According to an MoH study in 1998 and WHO data from 2009, 60–79% of the population in Ghana uses indigenous Traditional Medicine. Data obtained from the Tracking Adaptation and Measuring Development (TAMD) issues from 2004 to 2006 provide estimates of population use for T&CM practices of 1–19% for each of the following practices: acupuncture, ayurvedic medicine, chiropractic, homeopathy, naturopathy, osteopathy, therapeutic massage, traditional Chinese medicine and Unani medicine. Herbal medicines are used by 80– 99% of the population. Indigenous Traditional Medicine providers are regulated under the national laws, which are enforced at the level of the TMPC, zonal offices, city councils and community-level associations. Providers of acupuncture, ayurvedic medicine, chiropractic, herbal medicines, homeopathy, naturopathy and traditional Chinese medicine are regulated at the national level. Regulations for T&CM practitioners were updated in 2016.

Medical pluralism is a reality in several countries. In China, there is a traditional medicine department in every college teaching allopathic medicine and vice versa. In India, there are well documented examples of doctors of one system of medicine prescribing medication from other systems. For example, a study conducted in KEM Hospital in Mumbai highlighted that while 99 per cent of resident doctors were not even aware of the fundamentals of ayurveda, they were prescribing medicines like Liv 52 for liver ailments. It is high time then that mechanisms are put in place for enabling this integration in medical institutions across the country.

A “bridge course” provision in the National Medical Commission Bill 2017 in India, which was introduced recently , has invited widespread debate. According to the provision, doctors of Indian systems of medicine and homoeopathy (AYUSH) will be allowed to prescribe limited allopathic medicines upon passing the course.

The NMC Bill, 2017 attempts to facilitate integration of the different systems of medicine in a much broader sense. Clause 49 of the Bill calls for a joint sitting of the NMC, CCH and CCIM, at least once a year and proposes “specific educational modules or programmes to develop bridges across the various systems of medicine”.

In the matter titled: “Poonam Verma versus Ashwin Patel, CA, the doctor said, “A person who does not have knowledge of a particular System of Medicine but practices in that System is a Quack and a mere pretender to medical knowledge or skill, or to put it differently?a Charlatan.”

Hence any alternative medicine practitioner with the right qualification, knowledge and the right license is not a quack.

In the US, Australasia and a few countries in Europe, Integrative Medicine (IM) has become a paradigm shift in the way that primary medical doctors deliver healthcare to patients. IM offers patients more time for consultations, a self-empowered partnership with their healthcare practitioners, and a wider range of scientific evidence based treatments that are complementary to conventional medicine. Currently, there is an IM Consortium of over 50 academic health centers for integrative medicine established in association with academic hospitals in North America and three major IM centers associated with an annual European Congress of Integrative Medicine in Europe; CHAMP at Charité University of Berlin, University Of Zurich Institute of Complementary and Integrative Medicine at Zurich Hospital, Children’s Clinic for Integrative Medicine at Slotervaart Hospital Amsterdam, and the Royal London Hospital of Integrated Medicine.

It is time for Ghana and Africa to take bold steps in achieving an integrative approach to healthcare. It is time to do away with intellectual arrogance!

Latest Photo Reports
Catch up with all the political quotes from our politicians.
Advertise here
More Article
ModernGhana Links
Vandal Nathan Writes: Adios To Bacchus
The worship of God is the beginning of ignorance?
Energy transitions: The role of institutions and market structures
Accountants can reduce the environmental impact of mining: pointers for South Africa
How multicultural churches in South Africa are breaking down race barriers
Nigerians refer to violence as 'intergroup conflict': what's actually at play is xenophobia
The making -- and then breaking -- of South Africa's Robben Island Museum
Isaac Adongo writes: Under Akufo-Addo the average man's hand goes towards the mouth to drive away flies, not to put food into the mouth
My early memories of the Kumasi Academy Class of 1976
TOP STORIES